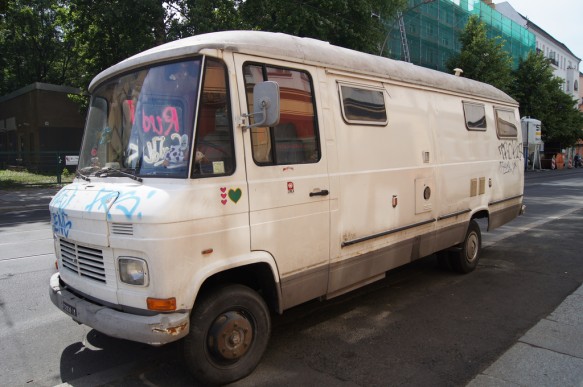 Life on the NYC Streets

To borrow the catchphrase of politician Jimmy McMillan, New York City’s rents are too damn high. As of last November, the median rent for Manhattan was $3100. Want to slum it in Brooklyn? That number drops to a measly $2800. Living in the city for many who don’t work in finance (and some that do) means getting creative with housing. For New Yorker Steven Cintron and his pit bull Bruno, creativity came in the form of a 1996 Gulf Stream Ultra RV he picked up off Craigslist for $5000. He parks it on the streets of the Park Slope neighborhood he grew up in.

According to the article, this lifestyle is hardly Kerouacian good times. They report:

Getting electricity takes some effort. Heating during the winter can get costly. Mail may need to be delivered to relatives’ places or post office boxes. There’s also the issue of how to hook up sewage lines.

There are also social costs. Hall reports that “the ladies aren’t really kicking down the door” (though we imagine the flimsy RV doors would be easy to kick down if prospective partners wanted to).

We have mixed feelings about Cintron and Hall’s situation. On the one hand, it’s a bummer that an increasing large number of New Yorkers (not to mention residents of other major cities like San Fran and Boston) simply can’t afford to live in the city they choose. On the other hand, necessity is the mother of invention. We’ve looked at other ways of converting parking spaces to housing in the past. We also saw the Boneyard Studios, that brought trailer mounted tiny houses–structures that are often plopped in the middle of the woods–to the city of Washington DC. From this New Yorker’s perspective, assuming the city could provide/permit some sort of utility infrastructure for mobile homes, I would rather have our limited parking spaces used for housing people than cars.

What do you think? Is this a sad commentary or innovative, high-density housing?