Bike Lanes in the Sky

Across the world, bicycles are quickly gaining ground as the transportation of choice–if they weren’t already. The reasons are clear: they’re exceedingly efficient and green, quick and keep you healthy. Their one big drawback is that some folks are (justifiably) skittish about sharing the roads with multi-ton masses of steel moving at great velocities. While bike lanes that skirt normal roadways are better than nothing, they still leave cyclists pretty exposed. What if there were separate, elevated lanes just for bikes? This is an idea many are considering.

Architizer recently did a roundup of some of these lanes, both existing and proposed, that keep bikes high and away from the dangers of cars.

Of course, leading the way are the Dutch, who have built a floating bike lane in Eindhoven called the Hovenring (in video above). Not exactly an extended lane, the Hovenring is a 236 ft elevated ring floating above a highway, bridging other bike lanes that skirt the highway. 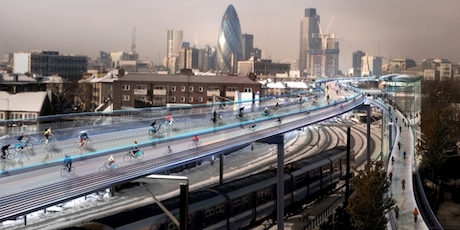 London SkyCycle by Foster + Partners (pictured above) is an ambitious plan that proposes a 136 mile network lofted above existing suburban rail lines. There would be 200 entry points, serving 2M people that live in the area it’d cover. According to F + P, following railways is ideal because the tracks were originally built for steam engines, who had to find the easiest, flattest route around the city. 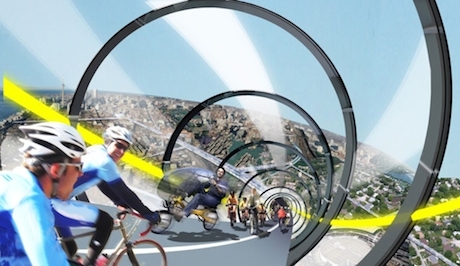 Velo-City in Toronto, Ontario by Chris Hardwicke proposes a similarly extensive network of bike lanes as SkyCycle. Unlike that latter project, Velo-City has a covered bikeway, protecting cyclists from the elements–probably the second biggest deterrent to bike riding next to safety. Unfortunately, Velo-City was proposed in 2006 and seems to have met its fate that year as well.

If all of this sounds a bit fantastic, consider that building an elevated bikelane is a far smaller engineering challenge than building an elevated road–or maybe even a terrestrial one. Without the abuse of heavy cars and semis, their upkeep would be far cheaper than normal roads. If only we had a bicycle lobby in Washington….

Check out more on Architizer