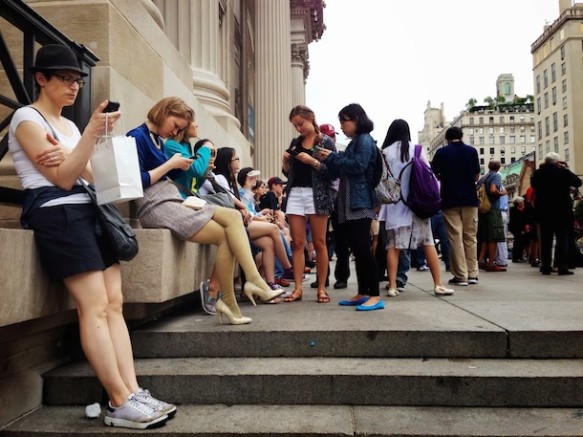 How to Create a Healthy Relationship with Technology

Aside from publishing this site and our real estate arm, one of the chief things LifeEdited does is spread the less is more gospel at various conferences. This last weekend we–specifically Graham Hill with my assistance–presented at the Revitalize Conference organized by the good folks over at Mind, Body, Green. The name of our talk was “Signs You Have an Unhealthy Relationship With Technology.” While there’s undoubtably a crisis of excess affecting consumer goods and architecture, those things are well-matched by the attention crisis. We live in a world where people are glued to glowing LCD screens for many of their waking hours–some of those hours are used to good effect, many are not. The talk was an investigation into this relationship between humans and personal technology as well as a brainstorming session for possible ways through some of the more problematic aspects of that relationship.

We touched on the marvels technology has wrought (mostly portable and information tech–smartphones, tablets and to some extent computers). It has given us the ability to access vast amounts of information instantaneously; the ability to fit tens-of-millions of songs or books in our pockets; the ability for unprecedented levels of connectivity, which has changed the face of social activism a la Arab Spring, the Occupy movement and others.

But in line with the talk’s title, we spent a good deal of time elucidating some of the more problematic aspects of technology use. A bunch of this we covered a few weeks ago with the post “Distracted, Dangerous and Dumb: Why it Might Be Time to Check Our Cellphone Use,” which explained how our technophilia is making us bad students, thinkers, friends, lovers, community members and parents. Expanding on that, here are few more things we found about the deleterious effects of our overuse of technology:

When we got all the nasty stuff out of the way, we started seeking solutions. We explained that technology is not bad any more than a chef’s knife is bad–it can be wielded by Mario Batali or Norman Bates for very different purposes.

The thing that became evident is that in many ways technology use is in its infancy. For most of humankind, we have had incremental introductions of technology. In Europe, the lowly table fork took about 700 years between its first notable appearance and widespread adoption. Smartphones have been around for about ten years, yet 56% of Americans already have them–a number that’s only expected to increase. We haven’t had time as a culture to develop rules and etiquette around their usage. So we proposed a few strategies that might start fostering a happy, healthy, balanced relationship with technology:

We also pointed out that these are not fantasitc goals. There are many people living with no or minimal technology, some notable like Jim Jarmusch, Warren Buffett, Louis CK and Alain de Bottom. The latter figure announced to his 443K Twitter followers that they should delete their Twitter accounts. Our closing thought was the reasoning de Botton gave to the Washington Post about his newfound relationship with Twitter. It’s a sentiment we think is applicable to most tech use. He said:

Twitter is of course a wonderful thing, but it is also the most appalling distraction ever invented. It sounds so harmless…[but] It denies us that precious non-specific time in which you can daydream, unpack your anxieties and have a conversation with your deeper self.

…We need long train journeys on which we have no wireless signal and nothing to read, where our carriage is mostly empty, where the views are expansive and where the only sounds are those made by the wheels as they click against the rails. We need plane journeys when we have a window seat and nothing else to focus on for two or three hours but the tops of clouds and our own thoughts.

We need relief from the Twitter-fueled impression that we are living in an age of unparalleled importance, with our wars, our debts, our riots, our missing children, our after-premiere parties, our IPOs and our rogue missiles. We need, on occasion, to be able to go to a quieter place, where that particular conference and this particular epidemic, that new phone and this shocking wildfire, will lose a little of their power to affect us – and where even the most intractable problems will seem to dissolve against a backdrop of the stars above us. FULL TEXT HERE