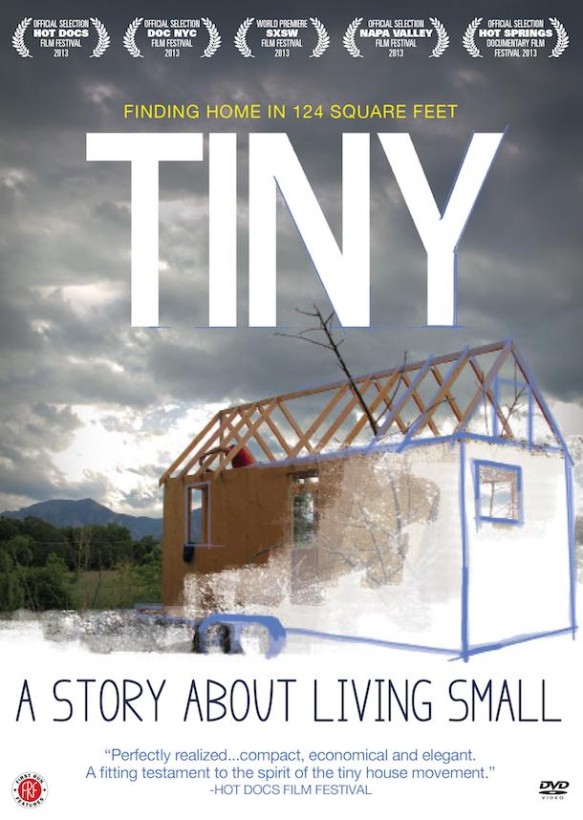 It was inevitable: those lovable, trailer-mounted tiny houses and all they represent–sustainability, non-consumerism, the DIY sensibility, off-gridded-ness, giving-the-finger-to-the-man-ness–have been immortalized in celluloid (or its digital equivalent). “TINY: A Story About Living Small” is a movie that follows one man’s epic journey into tiny living.

The documentary centers around Christopher Smith, who decided to build his own tiny house in the spring of 2011. The plan was to build the house in his then-Boulder, CO home, document the action, then move it to Hartsel, CO (aka middle-of-nowhere) where he had bought a small plot of land. Early on in the movie, Smith explained that he had no building experience, no blueprints, didn’t have a ton of money and that most people who built their own tiny houses took anywhere from six months to two years. Despite these factors, Smith made the ominous prediction that it would take him two to three months to build his. 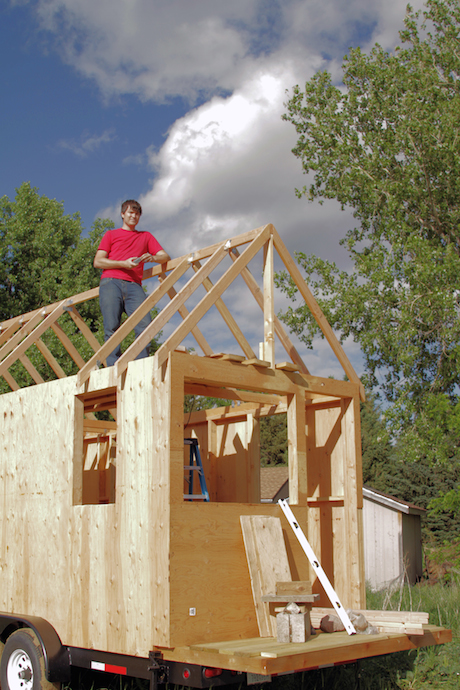 The film follows the buildout, which is much helped by his girlfriend Merete Mueller (the pair starred, wrote, filmed, directed and produced the whole thing). As expected, the process turns out to be far more difficult than Smith anticipated–construction issues, money troubles, weather, etc. With each passing month, Smith seems to travel further and further from his tiny goal. The movie becomes as much an ode to stick-to-itiveness and the DIY ethic as living small.

The movie does provide context for the tiny house movement. There are interviews with tiny house luminaries like Jay Shafer, Deek Diedricksen and Tammy Stroebel, as well as a number of “normal” people who have chosen to live tiny like 84 sq ft home-dwelling Dee Williams. While there’s talk about the aesthetic and design value of living small, the main reason most of the people give for their choice is financial independence. As Shafer remarks of tiny living, “The primary asset is freedom.” With very low overhead, no room for extraneous purchases, the tiny house life becomes so inexpensive that people are allowed to do and live the way they want. This is in contrast to the popular live-in-a-big-house-I-have-no-time-to-enjoy-because-I-work-too-much-so-I-can-afford-the-big-house modus operandi.

The movie also shows Smith’s quest to find a place in the world. Like many youngish folks (30 years), he moved around a lot throughout his youth–a condition exacerbated by a military upbringing. The world for Smith and many of his ilk is so filled with options that laying roots in one place can be very elusive. As we see Smith toil and run out of money and get hit with rainstorms throughout the construction, we get the sense that Smith is creating not just a place to live, but a place to reside in the universe (even if it’s a place that can be moved by an F250). 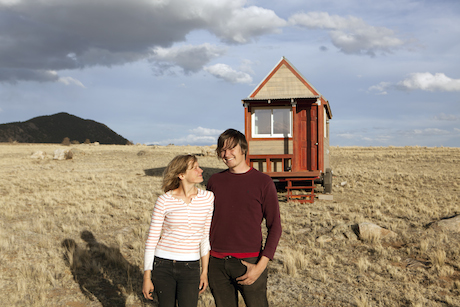 Smith does eventually complete the tiny house one year after starting construction. The event is almost an anticlimax; it seems insignificant compared to the journey that took Smith to that place.

More than a guide to tiny living, I think TINY is a testament to the power of developing a relationship with our stuff. Watching the movie, I got the sense that our bloated, disposable culture has a lot to do with our loss of connection to the things we use. We waste stuff because we no longer make stuff. Our homes come from realtors, not our labors. Our stuff comes from boxes, not from the earth. If we started forging connections between the things we use and how they are produced as Smith did, we would have a lot smaller homes with less stuff, but we would love those things a lot more.

If you want to see TINY, visit their website for screening announcements. You can also buy a DVD or purchase on iTunes.