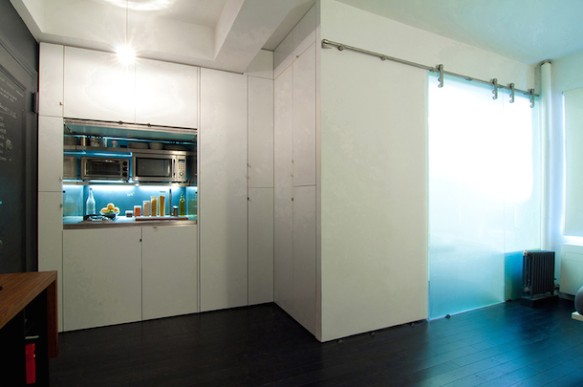 Architecturally speaking, 220 sq ft isn’t a ton of room to work with, particularly when you’re trying to include a full apartment’s worth of function. Such was the task at hand for New York’s Echo Design + Architecture when designing their “mini studio.” The firm stated their “intent was to make a small space appear more spacious without sacrificing practicalities of the everyday living.” What they ended up with was a clean, full-function little studio that packs a number of clever features that give it a spacious open feel.

Right inside the front door is a set of built-in cabinetry. Opening the doors reveals a small kitchenette with microwave, toaster oven, two burner cooktop, sink and counter height fridge. Closing off the kitchen adds to the overall cleanliness of the space. There are several other sets of built-in cabinets that presumably house the occupant’s clothes and other stuff. The bathroom is separated by frosted glass walls and door, which allow light to penetrate from the bathroom window into to the living room and vice versa. The frosting provides some degree of privacy, which is good for those of us not so hip on the the transparent bathroom trend.

There’s not a heck of a lot of furniture: a bed with storage underneath, a credenza with a folding table that comes out of its center section and a couple chairs. We suspect a little couch would be placed across from the pretty huge TV that’s on the wall.

Before you say anything: 1. yes, we know it’s a little bit devoid of color and homeyness–“stark” is not an inaccurate adjective to use in describing the look and feel of the place; and 2. it’s most certainly not a great place to raise a few kids–it might even be tight for a couple that spends much time at home. But the fact is there are tons of singles living alone, who just need a clean, modern place to crash and relax. For those people, we think this apartment would be infinitely livable and attractive.