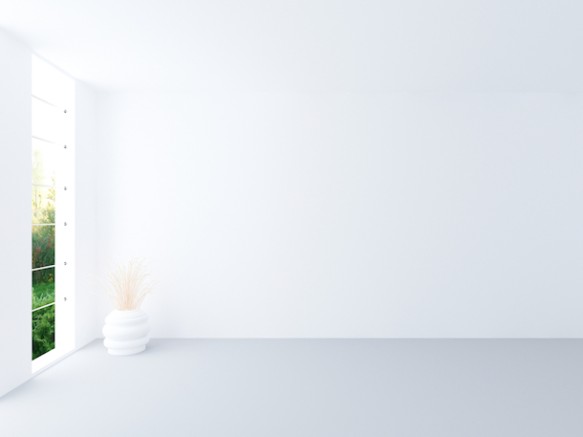 Nothing is the New Black

Rifle-through most any interior design or architectural magazine and you’ll notice something…or perhaps we should say you’ll notice nothing. Rooms with little furniture. Walls with almost no art. Counters with nary a tchotchke or adornment. “When It’s Cool To Have Nothing,” a recent article in the NY Times, explores the popular and somewhat counterintuitive phenomenon of equating less stuff with more style and affluence.

Author Anna North starts off citing a critique of this idea made by Ian Svenonius in Jacobin Magazine. He talks about the modern minimalist’s cultish idealization of Apple products, where everything is clean and sleek and all outmoded possessions–photos, CDs, DVDs, files–are tucked neatly in the cloud. Svenonius writes, “Apple has turned the world upside down in making possessions a symbol of poverty and having nothing a signifier of wealth and power.”

Svenonius even goes so far as to suggest a conspiratorial agenda by the tech industry in creating this minimalist ideal. They want to abolish the past, memories, totems, all things non-industrially-manufactured, all things non-tech. He writes:

The computer lords want to control everything, and central to controlling all things is controlling perception. Perception of the way things are, the way things work, and what’s happened in history so that they can frame their version of events and control the narrative; mind-controlling the masses to make them into better, more compliant consumers.

While North expands on Svenonius’ fairly tongue-in-cheek diatribe against the Church of Apple and all of its congregants, clutching their iPads like Bibles, she brings up some more level-headed charges as well. She addresses the idea that there’s an implicit affluence to anyone who chooses to have less. In other words, many people have less because they can’t afford more. North cites a Jezebel article in which author Tracy Moore writes, “Getting rid of things requires the having of things.”

On the surface, Moore’s claim makes sense, even though it contradicts Svenonius’ (perhaps misguided or incomplete) reverse claim that hyper-accumulation is the hallmark of poverty. It’s the same argument the NY Times lobbed at LifeEdited founder Graham Hill a couple years ago in their article “Selling the Pared Down Life.” It’s the idea that choosing less means that you could have more, and this ostensible hypocricy somehow cancels out the validity of the idea altogether.

While there is some truth to Moore’s (and others’) claim, the idea doesn’t withstand a visit to Walmart, where vast tracts of stuff–stuff that fills closets, storage lockers, nooks, crannies, landfills and neural pathways–are available for purchase to all but the most meager budgets.

North talked to Joshua Fields Millburn, who along with partner in minimalism Ryan Nicodemus, publishes the blog The Minimalists. He tries to dispel the notion that living with less is the rich man’s luxury. He says, “If anything, people with fewer resources, especially those with less money, can benefit most from minimalism because a minimalist lifestyle helps people determine what truly adds value to their lives— what things actually serve a purpose and bring joy,” and goes on to state that, “Rich or poor, married or single, black or white, simplifying one’s life can only benefit one’s circumstances.”

As to Svenonius’ claim of some Jony Ive-lead cabal shaping the techno-minimalist aesthetic, we have to respectfully disagree. Even he points to minimalism as part of a continuum of thought–from Bauhaus to Zen Buddhism, people have tried to live with less, to create clear open spaces free from noise and even the (often adored) artifacts of our past. Sure, there can be the tendency to obsess about, and even fetishize, reduction as much as others do addition, but the heart of the concept is becoming free from the unnecessary.

Svenonius misses some big, inconvenient truths. Minimalism is becoming such a movement now because of a widespread realization that the hoarding tendency he so cheekily lauds–a tendency with a massive grey scale is should be noted–is really screwing us up. Largely because of its accessibility across the various socioeconomic strata and across the world, it’s having a more pronounced negative impact on our collective pocketbooks, planet and emotional wellbeing. There’s no conspiracy, just exhaustion from dealing with all of our crap.

And we couldn’t agree more with Fields Millburn. The minimalist issue is not a rich or poor one, not a male or female, young or old, Apple or PC one. It’s a human one. Why wouldn’t everyone strive to only have what they need, to include only the things that bring joy and value, whether made by Apple or not?