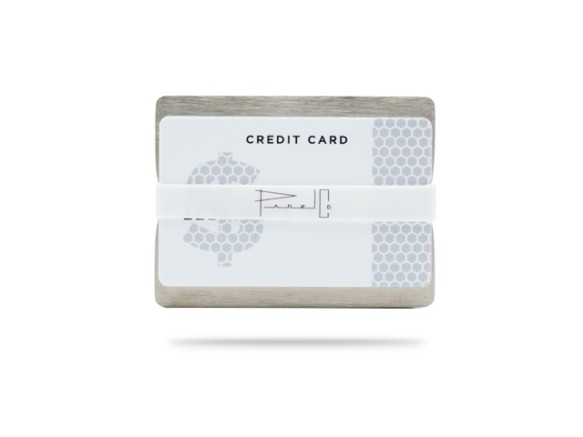 There are four items I rarely leave the house without: keys, cellphone, a pen and wallet. As these things are all kept in my front pockets (it’s a New York thing), I try to keep bulk to a minimum. I only carry the keys I need for the day (I have a few sets clipped to a carabiner and add or subtract sets as needed). My cellphone and pen (iPhone 5 and Uni-Ball Vision, respectively) have sorta absolute volumes–i.e. removing the phone’s screen or the pen’s cap won’t help save space without serious functional drawbacks. But there is a lot of room for space saving with the wallet. Depending on type (bifold, trifold, no-fold, portfolio, money clip, etc) material and contents, I can either have a dinghy or a frigate floating around in my pockets. Reducing wallet volume and contents is the idea behind the Panel Wallet, an ultra-thin, RFID-blocking, American-made “anti-wallet” that was recently launched on Kickstarter. 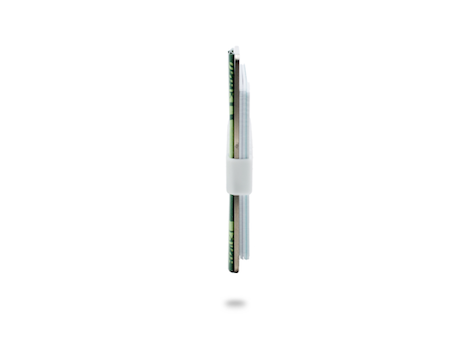 There’s not too much to the Panel Wallet. It’s a thin piece of machined aircraft quality billet aluminum (there will be a titanium version available as well) with a silicon band that wraps around to secure cash and cards. There are two indentations on the panel to keep the silicon band in place.

The aluminum and titanium serve as RFID-blockers. If you weren’t aware, many cards have RFID chips (radio frequency identification) in them. Nefarious folks can “skim” card information even when the card is in your pocket.

I swapped my wallet for a Panel Wallet a couple days ago and here are my impressions.

My current wallet is made of oiled canvas and isn’t particularly bulky, though the Panel Wallet definitely takes the cake in terms of minimal volume. It felt appreciably smaller in my pocket. I transferred the entire contents of my wallet: my driver’s license, two credit cards, one debit card, a health insurance card, a Park Slope Food Coop ID, a Brooklyn Children’s Museum membership card, a Metrocard, two gift cards, a credit-card-shaped USB thumb-drive and a recent-trip-to-the-ATM’s worth of cash (side note: read Tim O’Brian’s “The Things They Carried“). Though the Panel Wallet folks recommend only having 5-6 cards, the band handled those 11 cards pretty easily. 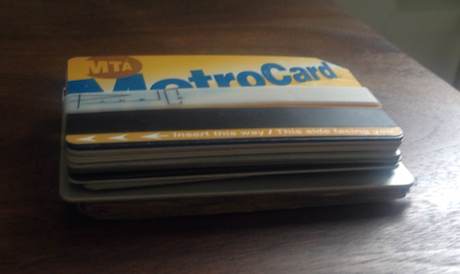 The minimal bulk in my pocket was nice, and as anyone who uses a rubber band to hold their cards and cash together, the silicon provides friction against the interior of your pocket, making it feel secure.

Getting cards out of the wallet was relatively easy, though it seemed like putting your most-used cards one or two cards deep made the most sense; this way the outer card would absorb most of the band’s friction. I did halve the number of cards as per their recommendation and stuff came out a lot easier.

Getting cash out was a little trickier as it requires you to take the whole wad out to access bills. This was similar to a business card holder I used to use as a wallet; cash had to be neatly folded in order to fit into the holder. This would require a little adjustment for people used to jamming cash into their wallet.

One interesting aspect of the wallet is the effect of its exoskeletal design. By seeing the contents of my wallet, I felt far more inclined to reduce them. Likewise, similar to living in a tiny house, the minimal volume inspired a far greater level of organization and economy of stuff. There was no space for disorganization and clutter. A couple old receipts I had been carrying around in my old wallet were promptly discarded when I switched to the Panel Wallet.

The Panel Wallet and other products like it show the inextricable relation between design and lifestyle choice. For some, making an intellectual decision to live a life with less stuff is enough–they can live in McMansions with no stuff without the temptation to fill empty spaces. But many of us need design constraints support our choices; we don’t get rid of stuff until we downsize our homes; we won’t get rid of clothes until we have smaller closets; we won’t clear clutter from our wallets until we get a slimmer wallet (or much tighter pants).

To get your Panel Wallet, visit their Kickstarter page. A $25 pledge will get you a basic Panel Wallet, $45 for a copper or brass plated one, $75 for a titanium and up.