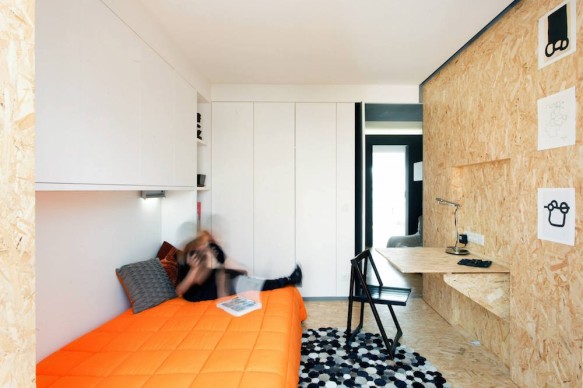 As has been mentioned on this site on several occasions, there are many ways to go micro beside individual micro-apartments. In most cases shared apartments will achieve lower per person footprints, as well as being more cost effective to build and maintain than studios. A particularly nice shared apartment is Lisbon’s Uma Collective’s Xadrez Apartment. The project began as a dilapidated 538 sq ft two bedroom apartment. With the use of wall beds, fold up desks and built in storage, they transformed the small space into a functional and flexible three bedroom student apartment.

One of the smarter aspects of the project is how Uma reconfigured the rooms. By reorienting the bathroom, they were able to expand the entrance to be big enough for a small sitting area. The reorientation also made the bedrooms–one of which had been a living room–about the same size and dimension, which are just big enough for sleeping and study areas. Each of the bedrooms flows into the center living area and has access to the bathroom. The kitchen and the bathroom are in their original location, eliminating expensive plumbing alterations.

Because each bedroom is self-contained, the design would be well suited for students who want privacy a bit or privacy, but might not be able to afford to–or ultimately want to–live alone.

As to the look of the apartment, Uma says on their site that they wanted to create a “contemporary design based on unfurnished materials” such as Valchromat, a type of MDF, and chipboard. The latter material is quite prominent throughout. While I’m not wild about the abundance of the material overall, the fact that it’s student housing–i.e. residents will have a finite stay in the apartment–would makes the choice little less radical. And though Uma’s site doesn’t indicate it, we imagine its use was informed by budgetary constraints.