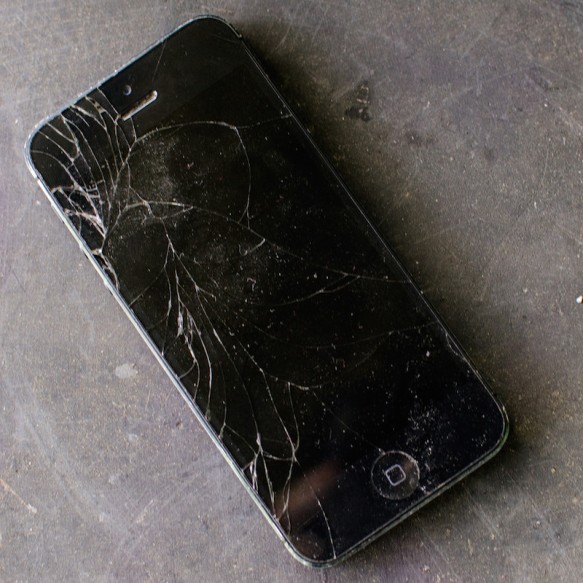 To Fix or to Replace?

For the last several months, I have had a small crack on my two year old iPhone 5’s glass. Following an unexpected trip to the floor (glass side down) a few weeks ago, the small crack became a full on shatter. A couple days ago, the shattered pieces started falling out, leaving me with small glass shards swimming around my pocket. I went to the local mobile store to get it fixed. The clerk told me that a screen replacement would cost $75. I asked how much a new phone would cost. He said given that I was eligible for an upgrade, a 5S would cost $99 and a 6 would be $199. He also said he’d give $30 trade in value for the old phone. In other words, the 5S, which represents an upgrade from my first gen 5 would cost $5 less than getting my old phone’s screen replaced.

Now let me back up: aside from my screen and some issues with its battery life (issues that could always be handled with a modicum of foresight), I have no problems with my phone. It still occurs to me as a technological marvel. Even though it’s only 16 GB, I haven’t had any particular issues with storage. It has some superficial scuff marks on its aluminum, but these do not impact the performance whatsoever.

I weighed the pros and cons of replacement and fixing:

Given these considerations, I am fixing the screen. The money is negligible. A better battery would be nice, but not nice enough to outweigh the other reasons not to upgrade. More than anything, doing a premature upgrade, to me, means submitting to the spurious logic of planned obsolescence and throwaway culture.

One of the concepts I have helped promote on this site is that we fill our lives with only the stuff we love and cherish. Sometimes this concept is misconstrued as living in some Dieter Ramsian ideal, where the few things that are left in our possession are immaculate. All furniture is clean and modern, all clothes fit perfectly and are plain and stain-free, all electronics are up-to-date. But this is an unrealistic, and often harmful, ideal. It’s one that can result in a “minimalist” sending as much stuff to the landfill as anyone else–not to mention depleting his or her bank account unnecessarily.

Rivendell Bicycle Works Grant Petersen coined the term “beausage”–a mashup of the words beautiful and useage. While he applies it to cool, often custom bikes, the term can apply to everything we possess. These are items we care for and maintain the best we can, but that also undergo the inevitable effects of age and use. If we can see things this way, we can see how an edited life can include the used, beat up and even outdated.