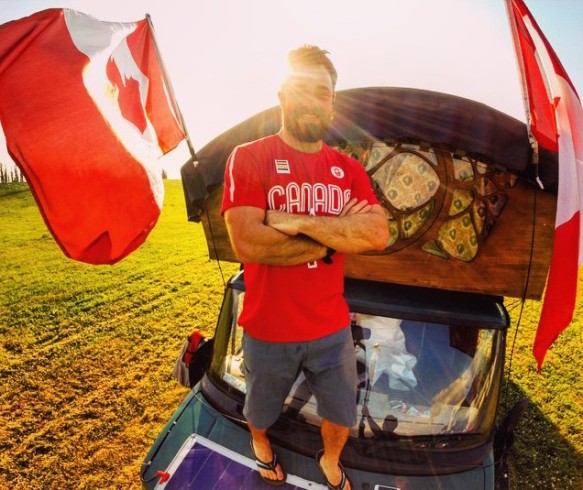 It’s All About the Benjamin

There’s a subject in many of the posts I write about that is present but not always called out by name. The subject is money. Time and again, we read stories about people editing their lives, not just because they want to create a smaller carbon footprint and have less to clean and manage. These are very valid reasons, but let’s face it, most people downsize and simplify because it’s cheaper. When life is cheaper, when the base of Maslow’s hierarchy of needs is satisfied, people are less concerned about making money, leaving them time to think about loftier pursuits than paying the bills. Canadian Ben Hayward is an awesome example of such a downsizer. For the last year, Ben has been living frugally out of his “Hobbit Mobile” traveling around Europe, training and competing to pursue his dream of being an Olympic kayaker.

Before his current journey, Ben was already an accomplished athlete. He’s ranked Canada’s #1 solo whitewater kayaker; he’s occupied a spot on the national team for the last nine years; and he’s amassed 47 gold medals in national games. Yet he wanted to go even further and compete in the 2016 Olympics in Rio. In order to be better prepared, he realized he had to go live in Europe where the best training opportunities existed.

While the Canadian government offers a small stipend to their team members, it wasn’t enough to pay for the myriad expenses that come along with training and traveling–hotels, food, race entry, coaches, etc. Most people in his position accept that they will go into debt to pursue their dreams–something Ben told me he was willing to accept as well if it came down to it. 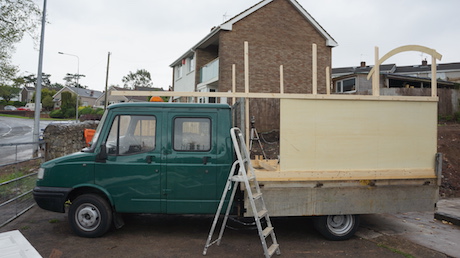 But Ben had another solution. As if his resume weren’t impressive enough for his 25 years, Ben is one year away from completing his architectural undergraduate degree. In thinking about how he could live cheaply in Europe, he conceived an idea to build his own traveling home that could also exploit his architectural chops. With the help of friend Adam, he conceived the Hobbit Mobile, a tiny house on wheels, which would allow him to live simply and frugally while he traveled and trained all across Europe.

Rather than spending his entire $5K nest egg on the van, Ben decided to crowdfund the construction of the Hobbit Mobile. In his “Van Starter” campaign, Ben managed to raise $16K, paying for the van’s entire construction (you can still contribute to his pursuits). 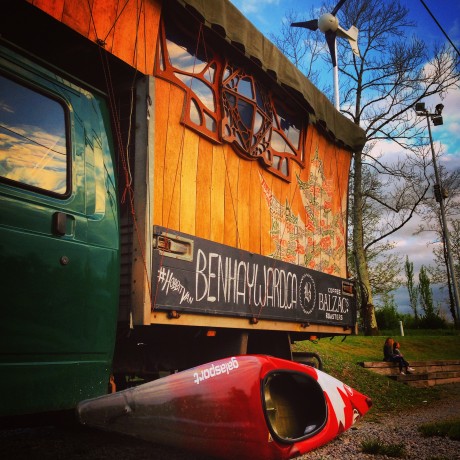 The van is built on a durable commercial vehicle frame and has what Ben called “Wallace and Gromit” (and Shire) style to it. There’s a lounge area, a lofted bed and a kitchen to prepare the 5-6K calories of food he consumes in a given day. With passenger space for six and room for 11 boats (gear is stashed inside the boats), he’s been the occasional taxi and/or hotel for his teammates. The house has solar arrays for power and there’s a copper cauldron for storing water, which also has a heating element at its base for generating hot water. Ben uses the bathrooms that are present at all of the training facilities where he camps. 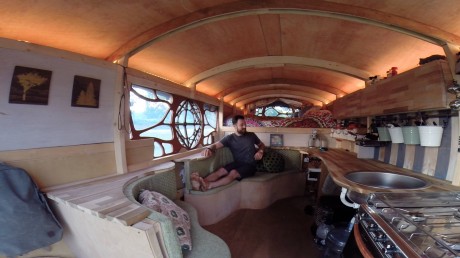 All of this not only allows him to keep expenses minimal, but it simplifies his life. He said that because he knows where he’s going to eat and sleep, the van affords him a lot of mental space that his teammates who are constantly making room and board arrangements might not enjoy.

Ben told me there are numerous other benefits of living in the van. “In a normal house, it’s so easy to plug stuff into a wall and pay later,” he told me. “It’s been really cool to be self-sufficient and be connected with power useage, prioritizing what I need to use power for.” He also says that he loves spending so much time outside. “Living in a small space makes you go outdoors, which I believe is better for the human psyche. Living in a conventional house, it’s so easy to spend most of your life trapped inside.”

Because his overhead is so low, Ben can make ends meet with his stipend and a few sponsorships. He has strung together some impressive results recently, entering the finals at the World Cup in Spain last week and earning a bronze medal at the Pan-Am Games a month ago. But he’s mostly focused on training for the World Championships, an Olympic qualifying event, that goes down in about a month.

“From an external view, it seems like a poor lifestyle,” he says of the rather spartan way he lives. “But the quality of my life is very high,” he assured me. Though not everyone would choose to live as he does, he believes the downsized, minimal way of life is hardly limited to single, male, Olympic caliber kayakers. By paring down to the necessities, keeping expenses low, spending lots of time outdoors, the life that you would dream of living might not be as far out of reach as we think.