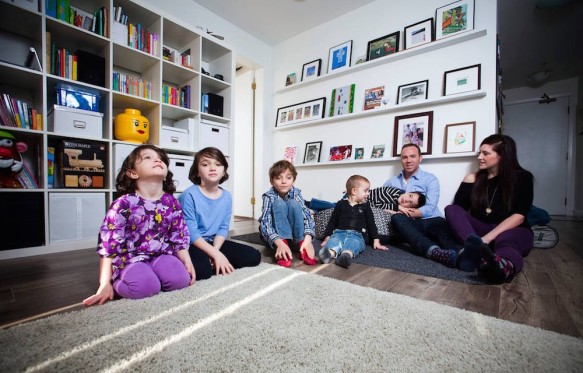 Living with five kids under one roof can seem like a daunting proposition for many. But that’s exactly what Adrian Crook is doing. But he is not raising the children–who range in ages 3 to 9–in some huge suburban fortress. Crook, his girlfriend and kids are happily living together in a cozy 1050 sq ft condo in downtown Vancouver. 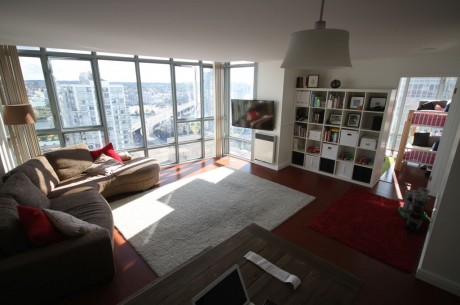 Crook’s home is not an unfortunate layover until he finds a larger spot. It is a conscious choice. As he explains in an interview with Buzzbuzzhome News, when he and his ex-wife had one child and another on the way, they moved to suburban North Vancouver “because that’s what you’re supposed to do when there’s another kid on the way.” But he hated living in the car-dominated landscape. “In theory you could still walk places but no one was ever on the streets,” he said in the interview. “Cars were flying by and there wasn’t enough density to make it interesting.”

Compounding his desire to walk places and his aversion to driving, Crook is no great fan of single family housing from a sustainability perspective. “Virtually everyone I know who lives in the suburbs drives everywhere–you end up driving between these little islands of activities. Once you get in that mode, you don’t question it.” This way of life, as we’ve looked at in the past, and Crook is quick to point out, is far more resource intensive than living in an walkable, urban setting.

Following his divorce, Crook, a professional video game designer, moved back downtown with nothing. His current place is a two bedroom condo on the 29th floor and is only filled with stuff that is absolutely needed. 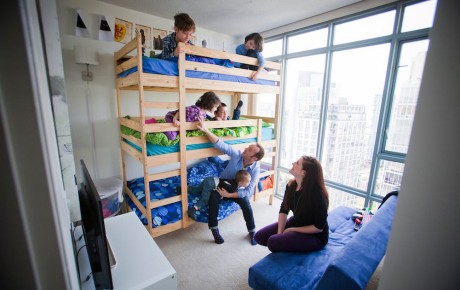 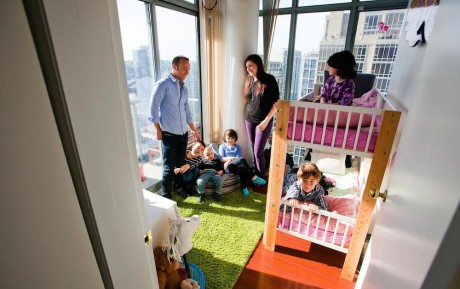 Crook and his girlfriend sleep in one bedroom, three kids take up in another and the remaining two sleep in a small, separate den. He keeps the place minimally decorated and doesn’t “own a bunch of crap.” Kids toys are carefully curated. He avoids “single-purpose or large plastic toys that can’t be reconfigured in an imaginative way or stored easily.” All possessions are subject to regular donation and trash runs. 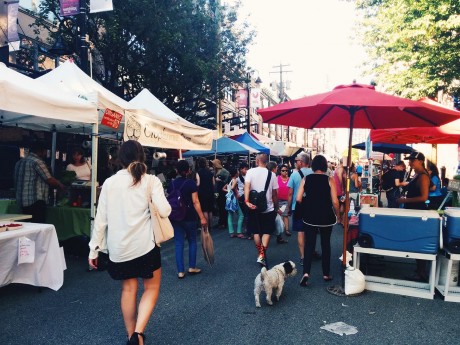 In addition to the walkability, Crook sees myriad benefits to his setup. The tight quarters engender a closeness between the children. Urban life exposes them to a far more expansive worldview than the one they might have in the burbs. And his army of five can get the space clean in 15 minutes.

Another big benefit Crook sees stems from his choice to rent. Despite Vancouver having some of the highest property values in North America, Crook said that condo values haven’t matched single family home values, which are through the roof. As such, he only pays $2200 a month in rent. Renting frees him from the homeowner’s frequent desire to constantly improve his or her place. He also likes that when things go wrong, he can just call his building manager.

Talking about what he’ll do when the children gets older, he says, “I expect that we all learn how to live together and if my children get to an age where they don’t want to always have to be in the same space, well then by all means go to the park or a coffee shop! They’re a bit young for that now but we don’t currently have any issues with living in the same space.” He stresses that kids know what’s put in front of them. If they’re exposed to huge homes in the suburbs where you have to drive everywhere, that’s normal. If they’re exposed to compact homes in the city where you have to walk or take public transit everywhere, that’s normal too.

He listed one other funny benefit to raising children in a small space. He wonders if one reason many children are not leaving their parents’ homes–or returning to them–as adults is because the homes are too comfortable. He says, “If my kids want more privacy, they’re going to have to move out [laughs].”

Find out more about Crook and his brood at his blog 5kids1condo.com.