A ‘five-room apartment’ at 60 square meters from 44/floors on Vimeo.

The Rem Koolhaas designed De Rotterdam is a 44-story building with three towers occupying the same footprint as a soccer stadium. 16 years in the making, it is now one of Europe’s largest buildings. The behemoth was intended to be a vertical city, incorporating work, live, leisure and hotel spaces across its vast campus. 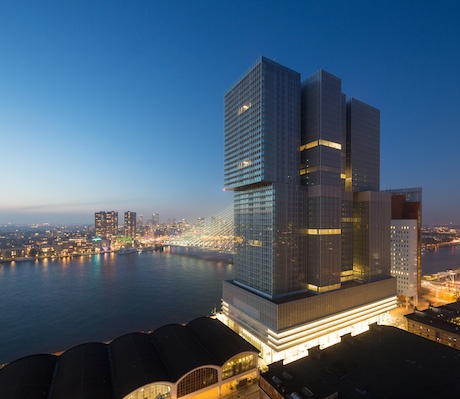 Even though its 240 apartments are not terribly small–they range from 60 to 250 sq meters (645 to 2690 sq ft)–it didn’t stop the good folks over at Italian furniture company Clei from kitting out the spaces to make them function like much larger ones.

More specifically, Clei decked out one of the building’s 60 sq meters apartments. Again, it’s not the size that’s notable, but the function the furniture adds to the space. The intention was to create five room apartment from the apartment’s two (watch video at top for the full tour). There are two bedrooms, a dining room, office and kitchen (we think those are the five rooms).

We see quite a few recognizable pieces in the apartment such as the Swing sofa/bed and Goliath table, both of which are featured in the LifeEdited apartment. There are some other, less familiar objects like a foldout side table and flat-folding chairs by Fläpps–the latter piece, with its colorful pattern, doubles as wall art.

When we spoke to Resource Furniture president Ron Barth a couple months ago, he made the great point that small space design is often far less relevant than optimizing the space you do have–a well-used 700 sq ft can best an inefficiently-used 300 any day.

We also talk a lot about context: you can have the smallest, greenest home in the planet, but if you need to drive two hours to get eggs, it undermines whatever efficiencies the space might provide. Even though the De Rotterdam’s apartments aren’t that small, couple space optimization with the inherent efficiencies of a building like this and you have a compelling, sustainable living setup.