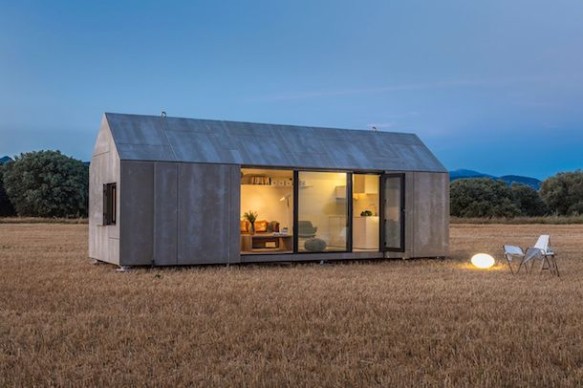 Multi-family housing and large buildings are, in most any possible scenario, going to be the most energy efficient form of housing out there. Multiple floors and dwelling units allow greater population density, reducing encroachment on nature and curbing sprawl and all its carbon-intensive side-effects. These structures have only one (albeit larger) thermal envelope–as opposed to individuated single houses–which makes them easier to heat, cool and insulate. And these are just tips of icebergs in terms of their salient features.

But let’s face it, the single family home ain’t going anywhere any time soon. People–for reasons quite understandable–like their lawns, privacy and autonomy. So the question might be how do we make the single family home better–more appropriately sized, more energy efficient, with less embodied energy and more architecturally interesting than than the status quo might suggest?

We ran across the Portable Home ÁPH80 by ABATON Architects as one possible version of what the single family home of the future could look like. The whole place measures a mere 27 square meters (290 sq ft). The classic, gable-roofed structure is sheathed in handsome grey cement wood board. Its interior is clad in white-dyed, sustainably harvested Spanish Fir.

The architects intended the ÁPH80 to be for two people, but they are working on a two story version that could presumably fit more. The homes are factory-built in Spain, making production faster and quality control easier as they work in a controlled environment (i.e. not outside). ABATON says one house will take six to eight weeks to build and one day to install. Prices start at 21,900€ ($31,100).

I lived in Colorado from 1992-2001, a period that saw massive population growth for that state. Seemingly overnight, vast rows of tract-houses blanketed the prairies of the Front Range, the area of that encompasses Denver and most of the state’s population. For the most part, these houses were big, poorly made and architectural Wonder Bread. But people bought them because they afforded them a home to call one’s own. 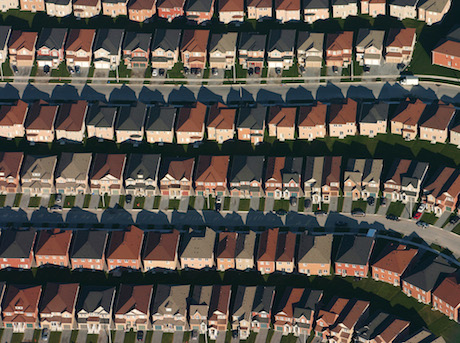 But the single family house doesn’t have to be so lame. By right-sizing and prefabricating, homes can be made faster, cheaper, greener and better. And as the ÁPH80 shows, with a tiny bit of care, you can even make them architecturally interesting. ABATON shows that the single family home, while perhaps never quite as efficient as a multi-story building in a city center, can be pretty great.

Check out ÁPH80 and other entries in Architizer A + Awards Living Small category.