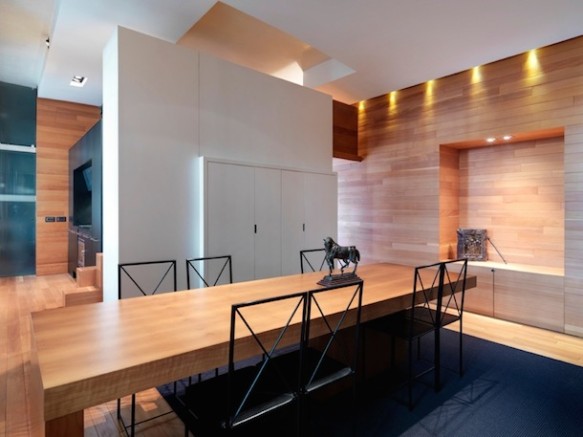 Few shapes are easier to work with than the box. Halve it, quarter it, cut it into thirds. But because of these endless possibilities, it can be difficult to choose the best one. In thinking about how to best divide a 624 sq ft apartment in central Milan, architect Daniele Geltrudi looked to early 20th Century architect Adolf Loos for inspiration. Loos had created something called the “Raumplan,” a design that shirks traditional room divisions in favor of flowing, multilevel spaces. Loos said, “For me, there are only contiguous, continual spaces, rooms, anterooms, terraces, etc. Stories merge and spaces relate to each other.” Loos’s philosophy is evident in Geltrudi’s design, which creates a unique flow of spaces with various different levels and chambers.

The main space has 12 ft high ceilings, which Geltrudi uses to maximum effect. He installed a large wooden volume that contains the kitchen, a lofted bed and a small chamber underneath which can be used as a study or second bedroom. Because the volume takes up relatively little area (about 176 sq ft), Geltrudi was able to make the living area very spacious and even include a nine foot dining table.

Other features include built-in storage throughout, both built into the douglas fir-paneled walls as well as the wood structure; this ample storage sidesteps the need for most freestanding furniture. There is also a bathroom that creatively squeezes a tub into the long skinny space.

In some ways, the apartment reminds us of a very high end version of Adam Finkelman’s studio conversion we looked at last month. The size and shape of the space is remarkably similar. Both used vertical space to install two bedrooms. The budget…well, we don’t have Geltrudi’s numbers, but we suspect it was slightly north of the one month’s rent Finkelman forked over. I guess the similarities end there.