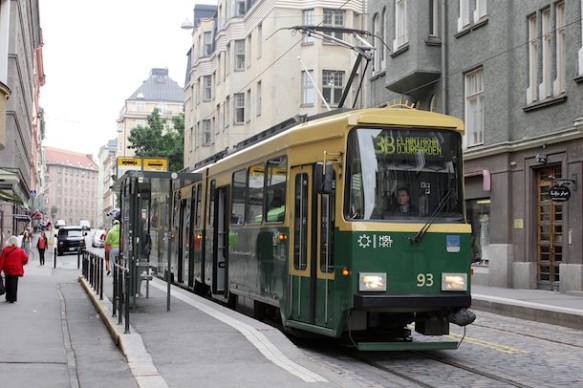 Last year we looked at DriveNow, an innovative program set up by BMW that would connect you with whatever form of transit made sense given your location. The system, accessed via a smartphone app, could, for example, direct you from a shared bike to the train to a DriveNow BMW car parked at the train station. The system holds the promise of a swift and efficient connection of transit options, none of which requires personal ownership of any vehicle.

One issue with DriveNow program is that focuses on automobile travel (albeit BMW wants those automobiles to be their electric i-Series). It’s also possible that if the system were governed by BMW, there might be some conflict of interest between public and private interests. What if the most effective way of traveling has nothing to do with BMW? What if something like DriveNow was an open and neutral platform, almost like a public utility? That’s exactly what Helsinki Finland is trying to do. Their “mobility-on-demand” system would be a comprehensive transit system that would seamlessly (and neutrally) link you to the most efficient mode of transit available.

Helsinki’s program was devised by transportation engineer Sonja Heikkilä and would allow users to enter a pickup and drop off location. You could enter in preferences and the system would map out your journey, even factoring in things like weather in order to devise an optimal plan.

Another key part of the system would be how payment is given. Currently, people pay for their transit to whichever system they’re using. For example, they pay the Helsinki Region Transport when they take public transit. The “transit-on-demand” program would centralize payment, buying transit wholesale from the various providers. People could choose various payment options; they could pay by the kilometer or have unlimited use, with each having a different pricing structures depending on frequency of use.

The city is launching a test run with a small group of people at the end of this year. If all goes well, Helsinki hopes to have this program up and running by 2025.

Helsinki’s Kutsuplus system sets a precedent that this could work. Kutsuplus is a geo-locational minibus service that creates its routes based on realtime demand–sort of like a mix of a public bus and taxi cab, with a price that’s square in the middle of the two.

Heikkilä told the Helsinki Times that this program is not merely representative of innovation and efficiency, but the fact that “a car is no longer a status symbol for young people.” In other words, people, particularly young ones, are just as interested in pimping their planets as they are their rides.