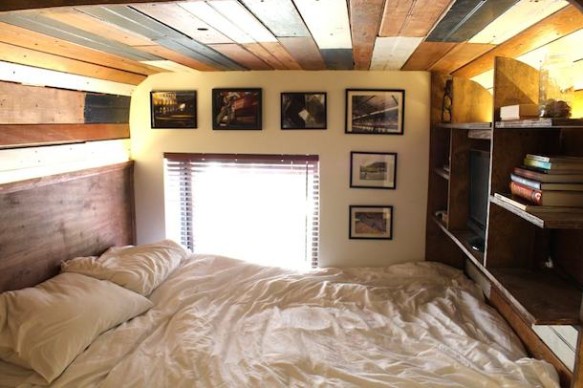 In New York and other expensive cities, many people are forced to get creative with apartment subdivisions, as one-for-one bedroom-to-occupant setups are too expensive. This was the situation facing Adam Finkelman and his roommate. Their needs dictated a two bedroom apartment; their means dictated a studio. A builder by trade, Finkelman decided to take a studio and–with a heap of creativity and resourcefulness–convert it into a two bedroom apartment, all on a shoestring budget.

Because it was a rental, the two men didn’t want to put too much money into the space; their objective was to keep the budget under around one month’s rent each. They got permission from their landlord to modify the space in any way they saw fit as long as they didn’t alter the floors.

The space had a long bank of windows, affording natural light and circulation for each bedroom. They felt that at a minimum each bedroom needed to be able to fit a bed and a window, however the little nooks became something more. Finkelman says, “Once we thought about it and planned it out, we managed to also fit stairs, wall shelving units, desks with storage, dressers, closets and two additional windows into each of our rooms.”

He continues, “These are the smallest rooms we have ever lived in, and we couldn’t be happier. We designed our rooms based on our needs and all of them were met if not surpassed. We tried to be as efficient and smart as possible with the designs and as a result we have no need for more space.”

Finkelman’s company Yorkwood Co specializes in the design, construction, and management of projects as small as a chair or as large as complete renovations. Many of these projects emphasize using salvaged materials, which is how they kept material costs in check. The roommates checked Craigslist daily for throwout building materials and scoured their posh Boeurm Hill neighborhood, where big brownstone renovations are commonplace. “We salvaged doors, windows, floor boards, sheetrock, [and] in some walls we used our old clothing for additional insulation,” says Finkelman.

Finkelman’s roommate is an avid cook, so they expanded the kitchen considerably adding new butcher block countertops, sink, faucet, shelving, and a dish storage/drying rack built into the cabinetry that drains into the sink below.

The aesthetic result is more funky than slick. The most remarkable aspect of the apartment is the fact that for the amount of money most people spend on putting in a new closet, the two guys did a renovation that added significant value and function to their modest space.