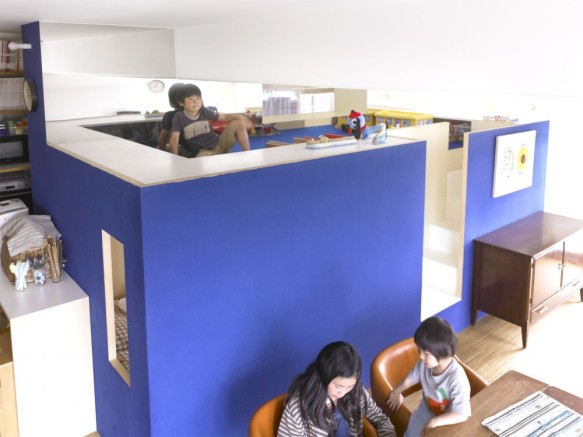 Japanese Family of Six Thinks Inside the Box

A few weeks ago, we saw how one man conveniently stashed his kid in a cubby in his tiny Warsaw apartment. Several thousand miles away, a husband and wife went a bit further, stowing their four children in little cubbies in their 770 sq ft Tokyo apartment.

To do this, Miha Design, the firm responsible for the renovation, converted the original apartment, which included one bedroom and a traditional Japanese room, into an open floor plan.

They created space separation by erecting two large boxes that house several discreet spaces. One box–covered with blue felt–contains three sleeping cubbies for the younger children; on its top is a 1.1m high play area–suitable for young children to scoot around. There are desks and benches on top as well; slots for legs allow the kids to sit upright. Under the beds are storage bins for the kids’ stuff.

The second box has a wood finish and beds for the parents and eldest child. The top has a similar desk and bench setup as the other box, albeit less blue.

The rest of the space is comprised of a dining/communal area, a galley kitchen, an entrance way and a storage area.

People are always asking us how to fit families in compact spaces. Miha Design’s space is one possible version, demonstrating a creative way to fit a large family in a small space in an expensive city–while still maintaining some semblance of separation for each family member. We do wonder what will happen when the kids grow up and cease to fit in their cubbies or start knocking their heads on the ceiling. We also suspect the dangling leg design might not fly with every parent.

All photos by © Sadao Hotta