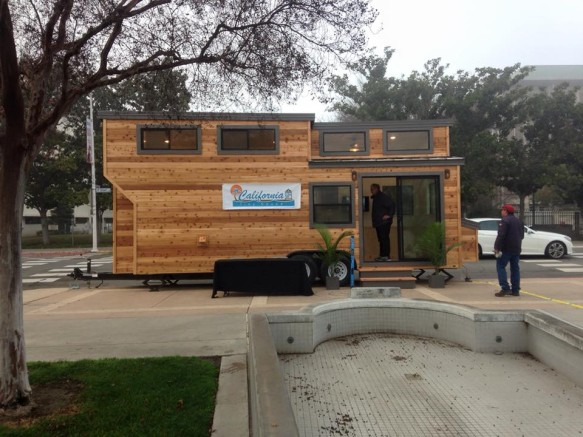 In December we posted about Walsenburg, Colorado, a tiny town that created a building ordinance to allow for the construction of a tiny house subdivision. As we’ve long noted, zoning is the biggest hurdle for tiny houses taking off as a widespread housing option. While most tiny houses are designed as permanent dwellings, they are treated as RVs in the eyes of building code; this classification means that the houses can’t be parked in a residential area indefinitely. While the Walsenburg news represented a step in a great direction, the fact that it was done in a town of 3000 people made it a bit easier to dismiss. But when a city of a half million people does effectively the same thing, it might harder to ignore. Fresno, California–the half million person city in question–recently passed an ordinance specifically permitting tiny house on wheels (THOW) as permanent dwellings.

The move is pretty unprecedented. “We are the first city in the nation to actually write into its development code authorization for ‘tiny homes,’ ” the city’s mayor Ashley Swearingen said. While tiny houses have cropped up in various places around the country, their existence was shoehorned into existing code, typically regulations concerning accessory dwelling units (ADUs). Making code that treats THOWs as a distinct housing typology might go a long way to legitimizing tiny houses across the country.

What’s also notable about the ordinance is its lack of restrictions. Here are the main criterion a Fresno tiny house must meet as pulled from the Tiny House Association of America:

Aside from point #1, which Lloyd Alter at Treehugger says might cut out a number of DIY-built homes, the rules allow for real deal tiny houses–i.e. really small and self-contained. And unlike most of the California counties that permit tiny houses currently, Fresno does not restrict their use to caregivers. The tiny houses can be used by homeowners for their personal use or as rental property.

One thing that does not seem to be a part of this code is building only a tiny house or tiny houses on a lot of land (the tiny houses must share a lot with an existing home). That said, there is no shortage of single family homes that can play host to tiny houses. In fact, adding density to the existing, sprawled out single family housing infrastructure is probably the greatest promise for tiny houses movement.

All in all, this is great news and we look forward to continued deregulation of tiny houses and other innovative forms of housing that are aligned with how we live today.