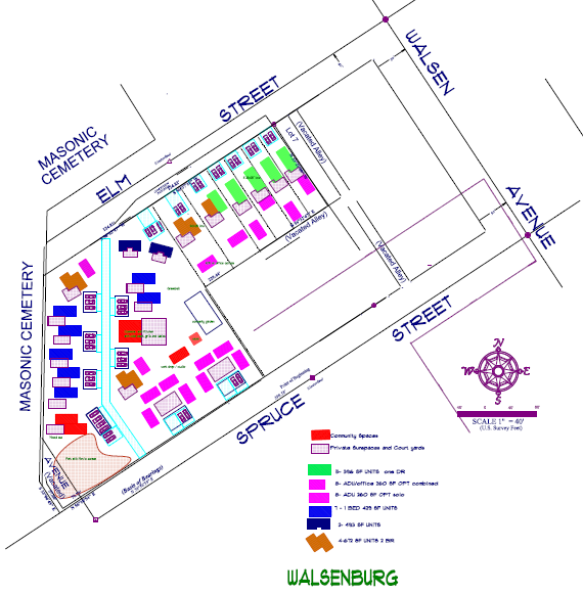 If You Let Them Build It, They Are Much More Likely to Come

The world is abuzz about tiny houses. They are the architectural antidote to all that ails the modern American home: they are small, affordable energy misers whose tiny confines prohibit the accumulation of extra stuff. But tiny houses have a fatal flaw: they are illegal for permanent habitation in most cities. The few cities where tiny houses number more than a half dozen (Portland, Olympia and, um…did we say Portland?) are cities that have relaxed their zoning, usually designating them as Accessory Dwelling Units (ADU, aka “Granny Flat”), which are basically houses set up behind other, larger houses. But the Colorado city of Walsenburg (don’t worry, this author–a longtime Coloradan–has never heard of it either) is creating a plan that might someday soon serve as a precedent on how tiny houses can turn from architectural plaything to viable housing solution.

The plan, helmed by Sprout Tiny Homes, is to create a subdivision made entirely of tiny houses. Rod Stambaugh, founder of Sprout, convinced the Walsenburg city council to remove their restriction of building smaller than 600 sq ft. Rather than riding on trailer beds, these houses will have foundations and be connected to the grid–a good thing for people who might not be keen on composting toilets. But the houses themselves will be pretty damn small: the 32 units will range from 262 to 672 sq ft. There will also be a community center and outdoor movie theater. Stambaugh told Outside Magazine that he expects them to sell for $60,000 to $130,000.

Walsenburg is a former coal mining town of 3K that has seen better days. The tiny house subdivision is meant as a way of providing affordable housing and revitalizing the economy. As Lloyd Alter notes in Treehugger, that revitalization will be greatly abetted by what could by the US’s largest cannabis growing facility, which is going up on the outskirts of town. In fact, it wouldn’t be surprising if the main intent for the tiny house subdivision is to provide housing for workers at the the facility.

While company housing for pot growers might not do wonders for changing stereotypes about the type of people who gravitate toward tiny houses, the end result could be the same: showing that tiny houses can be a viable, safe, affordable housing solution. Stambaugh has plans to do another development in nearby Salida, Colorado and would eventually like to bring tiny houses to more prosperous mountain towns, such as Vail, where there’s a major shortage of affordable housing.