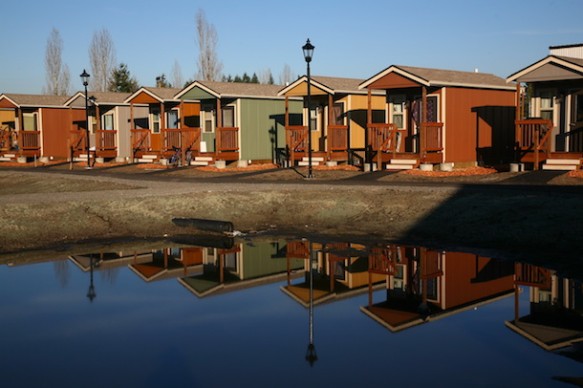 If you build it, they will come..eventually. Such is the case with the perpetually displaced tiny house building typology. The popular demi-homes have a habit of falling on the wrong side of the law and habitability. They often find themselves getting moved around town because they can’t be stationed anywhere for too long, or remaining unoccupied because they fail to be considered legal housing. A new tiny house development in Olympia, Washington may have hit the nail on the head for how to use tiny houses in an ongoing, legal and logical fashion.

Quixote Village, as the development is called, is a permanent tiny house village that evolved from Camp Quixote, a floating homeless camp founded in 2007–a camp  that moved over 20 times since its founding, hopping from various faith community lands until they exceeded city ordinance time limits for campouts.

The village is made up of 30 residents from the camp, who occupy 30, 144 sq ft tiny houses, spread over 2.1 acres. The village includes a community center with laundry, communal kitchen, living and dining spaces as well as a community garden.

Each house cost $19,000, which includes materials and labor at commercial rates. The total project cost $3.05M. The project was funded and guided by a nonprofit called Panza, which is made up of the various Olympia faith organizations that supported Camp Quixote throughout its history.

Quixote Village got so much support largely because of its longevity and cohesiveness. It is self-governing and abides by two code of conduct–one established by Panza and another by itself. 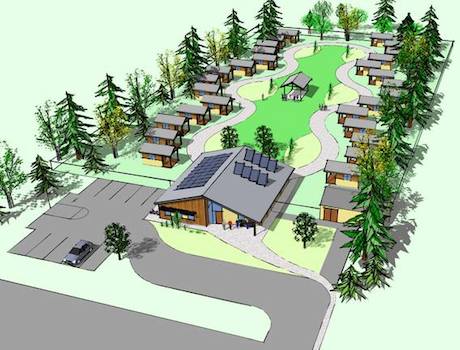 The village planning was a collaboration between a committee and architect Garner Miller. Residents had input as well as a NY Times article reports:

The residents lobbied for a horseshoe layout rather than clusters of cottages, in order to minimize cliques. And they traded interior area for sitting porches. The social space lies outside the cottage. Or as Mr. Johnson put it, ‘If I don’t want to see anybody, I don’t have to.”

This community oriented planning reminds us of Pocket Neighborhoods, which feature homes with large porches that face a community-shared commons.

Half of the residents report zero income, and the average annual income of the villagers that do report one is $3100, most of which comes from day labor, pensions and social security. Villager are expected to give 30% of whatever income they do produce. We assume the shortfall is made up by Panza.

It might be a stretch to say we envy the Quixote Villager’s situation, but we think their setup–with its minimal, community designed housing–makes far more sense than most residential housing. And it may go to show that modest means often produce solutions that make far more sense than ones that well from unlimited means.