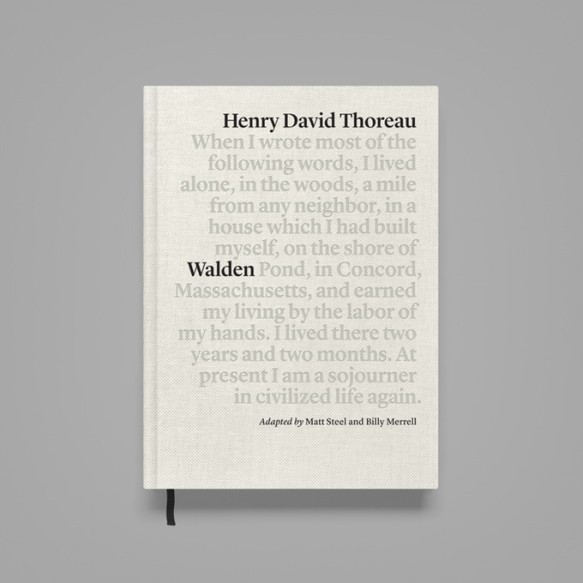 One of the–if not the–seminal texts of simple living is Henry David Thoreau’s Walden. It’s the tale of a man who moves alone to the woods, lives in a small cabin to find his truth. It’s also a treatise on simple living, connecting with the earth and oneself, of removing oneself from modern society’s misbegotten systems and ideals…or so we’ve heard. If you’re like us, you’re familiar with the many Thoreauvian axioms (“Most men live lives of quiet desperation [not the actual quote],” “My greatest skill in life has been to want but little” and so on), but, when pressed, must confess that you haven’t actually read the book. Take this passage from the first line of second paragraph of the book:

I should not obtrude my affairs so much on the notice of my readers if very particular inquiries had not been made by my townsmen concerning my mode of life, which some would call impertinent, though they do not appear to me at all impertinent, but, considering the circumstances, very natural and pertinent.

It goes on like this for 400 or so pages. It’s not a critique of Thoreau’s writing ability. The book was written almost 170 years ago. This was how people wrote and spoke back then. But its arcane prose–not to mention its sometimes offensive references–is damn near indecipherable to the modern reader. Good for soundbites, but not necessarily for sustained reading.

A new Kickstarter project seeks to translate Walden for the modern reader. Launched by designer Matt Steel along with writer and editor Billy Merrell and illustrator Brooks Salzwedel, The New Walden is a new take on Thoreau’s timeless wisdom.

In an essay on the site Medium, Steel explains his initial motivation:

The first time I tried to read Walden, I flunked out about halfway through the first chapter. Initially attracted by the concept of Thoreau’s experiment, I found myself quickly entangled in a dense thicket of language. I had expected to hear about the cabin he built in the first chapter; instead, I encountered an essay on economics and societal vice, with many twists and turns.

Eventually, he made it through the book and it rocked his world. He explains:

In Walden’s first chapter, Thoreau delivered the most eloquent and scathing criticism of consumerism that I’ve ever read. He saw that many of his fellow men and women were spending their best moments straining after far more than they needed; chasing after possessions and comforts that would never satisfy their deepest longings. He discovered that when we reject greed, simplify our lives, and pursue living in the present, a quiet revolution takes place inside the spirit and ripples outward into the lives of others.

The book’s impact inspired him to create a modern version, one that had updated language and was beautifully designed and illustrated. 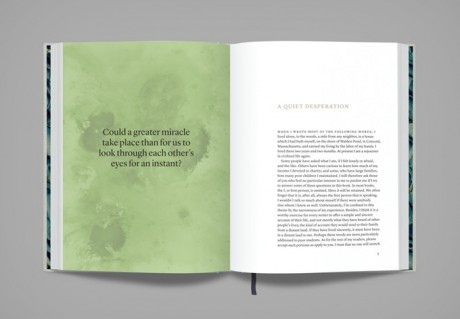 Steel is quick to point out that he is not changing the content of Walden, just the form. “This version will be neither abridged nor dumbed down,” he writes. “It will still read and feel like Thoreau; still set in the 1840s. I am not replacing telegraphs with emails, nor wagons with SUVs…Walden is dense, layered, and complex….So when I talk about removing literary obstacles from Walden, I’m only referring to structures, syntax, and words that have fallen out of use since 1854.”

The beautiful hardbound book will not only rework the text, but will be carefully assembled, designed and illustrated, in an attempt to make it appealing to readers of today and 100 years from now.