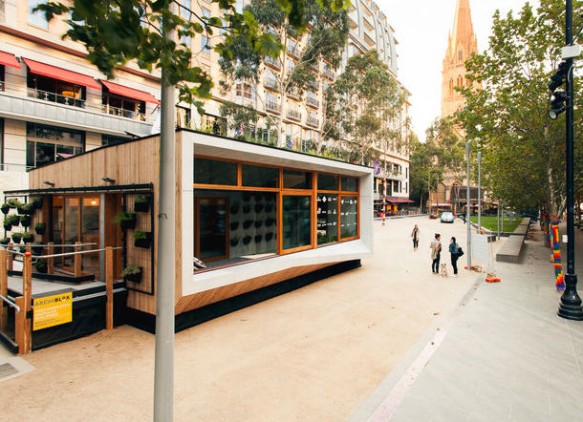 Keeping Up with the New, Improved Joneses

Many, if not most, of our habits are influenced–if not outright dictated–by a desire to keep up with our peers. We choose the homes we do, we consume the stuff we do, we have the careers we do and make many other choices in response to how others in our worlds are living. This is the underlying notion behind the expression “keeping up with the Joneses.” If Mr Jones gets a new luxury sedan, we are far more likely to try and keep up–or one-up–his purchase with our own sedan. But what if the Joneses were folks who used a meager amounts of energy? What if they lived in modest, super-efficient homes and used few newly-made products? What if the Joneses were exemplars of responsible, sensible and sustainable living? That’s exactly what The New Joneses project is about.

TNJ is essentially a showcase of ideas of how people can reduce their consumption and live more sustainably. The centerpieces of the project are mockup homes set up in public spaces in Melbourne, Australia. There have been three demo homes in the last few years, used for press ops, promoting various non and for profit companies to showcase their services and stuff.

Their latest demo house is quite badass. It was designed by Archiblox Architecture. It has prefab construction and is “carbon positive,” meaning it produces more energy than it needs to run. Through the use of passive solar design, grey water and water catchment systems, PV power, green walls and roof and many other energy-saving features, the house is extremely energy efficient. According to Archiblox, over its lifespan, the building will emit 1,016 (tCO2e) tons less greenhouse gases than a standard home of similar size and function–the equivalent to taking 267 cars off the road, or planting more than 6,095 native trees.

At 828 sq ft, it’s not all that compact, particularly considering it’s a one-bedroom, but it’s not crazy large either, considering Australia boasts the largest average-sized home in the world. The layout is probably also designed to help large groups of people move through the space.

I think the best part of the project is its name. It’s a perfectly natural human tendency to want the things our peers have. But that tendency can be easily co-opted by the interests of entities–be they the interests of real estate developers peddling McMansions or some retailer selling a bunch of crap you don’t need–in ways that neither promote health nor happiness. In other words, if keeping up with the Joneses is a fairly intrinsic human behavior, we might as well choose Joneses that have our, and the planet’s, best interests in mind.

If you’re in Australia, the demo house will be on display in Melbourne’s City Square through Feb 15. Check the TNJ website for more info.