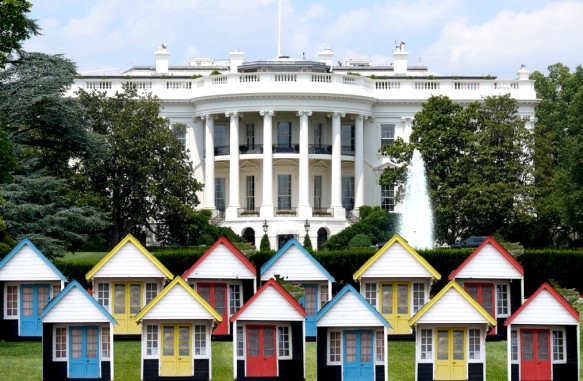 In a bold campaign promise, Presidential hopeful Bernie Sanders declared that he will transform the White House from a single family house into an extensive, high density community capable of housing the entire federal legislative body.

“Here’s how I see it,” Sanders told the Washington Post. “The White House includes 18 acres of virtually unused, totally prime real estate within walking distance of the Capitol. We need to cut government fat, and one of the easiest ways of doing that is using what we got.” Sanders’ advisors believe that they can fit a tiny house on a mere .01 acre, which includes minimal setbacks. Even with the addition of thoroughfares, community clubhouses and a biodynamic farm (all part of Sanders’ plan), the lawn will easily accommodate the 435 members of Congress and their families.

But his plan extends beyond Congress. He plans to make the White House itself into one big co-housing community. “The White House has 132 rooms and 55,000 square feet of living space! What one family needs that much space? It’s ridiculous. With smart design–you know, Murphy beds, room dividers, that kind of thing–we can fit the whole Senate in there easily.”

To bring in additional revenue and shrink the American trade deficit, Sanders will Airbnb the tiny houses and rooms when Congress and Senate are adjourned.

“I am not a believer in the axiom that familiarity breeds contempt,” Sanders said. “Contempt is borne of distance–when we distance ourselves from people, we lose understanding and kill compassion. By bringing people together, both physically and spiritually, we can mend the bipartisan rifts that have too long divided our legislative bodies.”