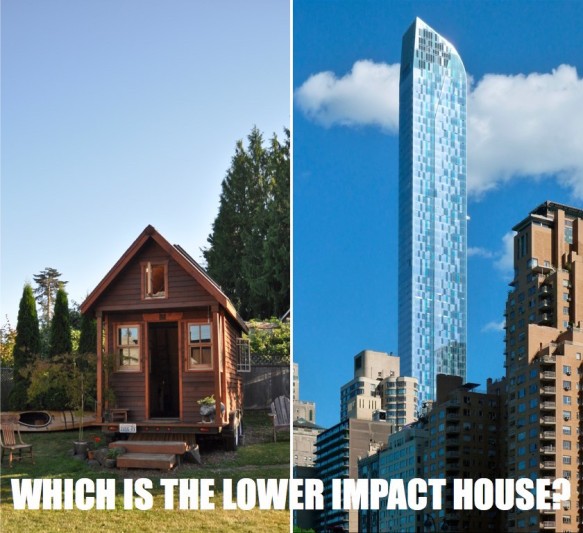 The Problem(s) with Tiny Houses

At LifeEdited, we love tiny houses! They are like architectural and existential reduction sauce. Every space and object that isn’t utterly essential, that isn’t something you absolutely need, is boiled away. They are great examples of how humans can live simpler, lower impact lives. Yet tiny houses have some big problems, ones that are often overlooked amidst the hype, and it’s not just their lack of legality.

The biggest problem with tiny houses stems from density, or lack thereof. At their core, tiny houses are small single family homes. As Kriston Capps wrote in CityLab a couple years ago, tiny house enthusiasts “are confirming the status quo, if shrinking it a little.” All single family homes, huge or tiny, require their own lot and almost invariably take up more space than multistory, multifamily housing. Individual lots lead to reduced density which leads to greater land use and increased transportation needs (aka sprawl). To build density, the best strategy is often to build up rather than out.

Here’s an absurd example to demonstrate this point. One57 is a building in Manhattan often called “The Billionaires Building.” It is the epitome of excess. One of its penthouses fetched over $100M and the average per square foot purchase cost is about $6K. But the building’s 94 units and 75 stories (some of those units are as big as 11K sq ft) sit on a 23,808 sq ft lot. This means that each unit takes up 253 sq ft of ground space…oh, and there’s a 210 room hotel on its lower floors.

Now compare that to a normal tiny house on wheels. An average tiny house is about 200 square feet. Add a very modest 10 ft of setback on each side and you’ll need a 1K sq ft lot. Just to be generous, we’ll say that a car can fit within that lot, but realistically you’ll need additional room for parking. 1K ft is still considerably smaller than the average single family house lot which is 15,456 sq ft, but quite a bit more than the humble One57.

Speaking of cars, whenever you see a tiny house out in the country, you have to wonder: how do residents get to and from their houses? How do they get their food? In most instances, they drive there. And as we know, transportation is one of the (if not the) biggest factor in increasing a home’s carbon footprint. Meanwhile, the residents of One57 can walk to get everything they need and are spitting distance from several major subway lines (One57 residents are more likely to spit on the subway riders than ride the subway, but that’s a separate point).

Then there are access issues. We ran across an article singing the praises of tiny houses as retirement homes. While a nice idea, most tiny house designs are a poor fit for seniors. Sleeping lofts are difficult and hazardous to access. And try fitting a walker into a tiny house bathroom. And single family housing tends to be more isolated, which is not ideal for seniors. Meanwhile, One57 has commodious bed and bathrooms and lounges and spas where you can discuss with the hassles related to the Panama Papers with your peers.

Of course there are many asterisks to the above arguments.

The main point is that a home’s impact cannot be assessed without considering its context, and in general the context that’s going to make a home lower impact is locating it in a central location. And the way to build more units centrally is building modest (they need not be tiny) multistory, multifamily housing. Condos and apartments might not be as photogenic as tiny houses, but they get the job done.

The last point, lest you think we’re hating too much on tiny houses, is that it’s not an either/or situation. As Shaunacy Ferro eloquently put it in FastCo.Design:

Just because micro-units are badly needed in urban areas doesn’t mean small-scale dwellings should be restricted to tiny apartments in big cities. New zoning laws in Portland, Oregon, encouraging the construction of granny flats is still adding density and creating more affordable housing options, albeit not to the same extent as San Francisco’s 300-square-foot units. Nor are micro-houses on large plots of land without benefit. Precious though a beautifully designed tiny house in the midst of the wilderness may look, it’s a better environmental choice than building a McMansion. Shrinking the status quo isn’t that bad of an idea.