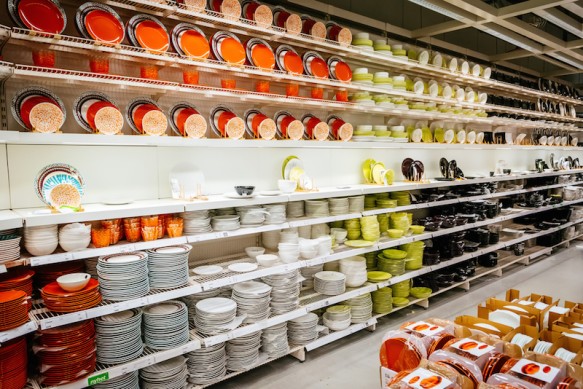 Have We Reached ‘Peak Stuff’?

Make no mistake about it, the world still abounds with tons of stuff, but if we were to believe some, we might be approaching a state of “peak stuff”–a state where we have capped out our appetite for extraneous candle holders and handheld blenders. Ironically, one of the exponents of peak stuff is IKEA’s Chief Sustainability Officer Steve Howard, who, the other day, was on NPR talking about this theory. He thinks that the “total material impact of society in the West…[has] probably just about peaked.” He explains:

If you look at things like oil–well, actually, oil sales have peaked in the U.S. and Western Europe. Beef sales have pretty much peaked. Sugar sales have pretty much peaked. You can see trends in things like cars where young people, they’re getting their driving licenses either later or not getting them at all. This trend’s very broad across society….and we’re [IKEA] not immune from the trade. Obviously, you know, there are still people who don’t have–who have very limited means who would like significantly more stuff. But broadly, you saw a tremendous expansion in consumption and people’s livelihoods through the 20th century. And the use of stuff is plateauing out.

This is not the first time IKEA has addressed matters of reduced consumption. Their 2025 kitchen concept envisioned a future with far less food and space than the present. But the implications of peak stuff on the retail behemoth are unclear. Asked if IKEA–easily the single largest purveyor of stuff–would scale back its operations in the west and ramp them up in developing nations, Howard said, “We still want to meet more customers and to make ourselves much more accessible, so we’ll actually expand in the U.S. and still in most markets in Europe.”

His stance is that if there is going to be stuff, that that stuff be from IKEA, which has launched programs to promote reuse and responsible disposal in a number of its European outlets. He said that people want to reuse, recycle and generally make their stuff last as long as possible, but they often lack the channels to do so.

We hope Howard’s theory is correct as the planet–and some might say the human psyche–is buckling under the weight of our obsession with accumulating stuff.

There are many indicators that we have reached peak stuff: minimalist sites like ours, the media’s obsession with tiny houses and so forth. But we realize as well as anyone that ours are minority views. That said, these things might be suggestive of what writer William Gibson once wrote, “The future is already here–it’s just not evenly distributed.”

What do you think? Have we reached peak stuff or is this a clever turn of phrase that will have little, if any, market impact?