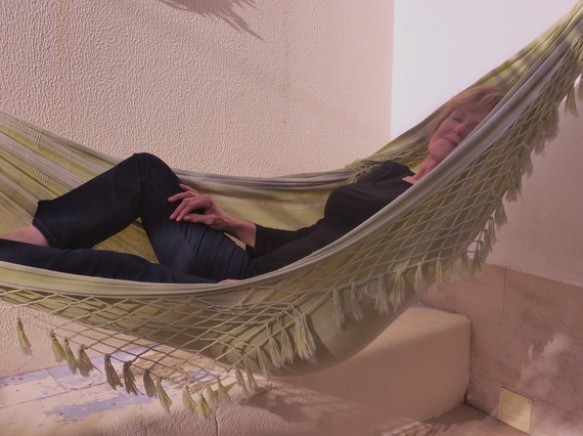 Grandma and Grandpa Lighten Up and Hit the Road

A few weeks ago, we took a look at full time, van-dwelling nomad Foster Huntington. While his life looked pretty awesome, it did have a certain youthful character to it. There simply aren’t a ton of people above the age of 35 who want to hole up in a pickup pop top camper for any appreciable length of time. For the chronologically gifted, the stereotypical nomad home is the RV, but for many their ginormous size, often high cost to purchase and voracious thirst for fuel are understandably big turnoffs. A recent NY Times article entitled, “Increasingly, Retirees Dump Their Possessions and Hit the Road,” talks about, well, how many retirees are dumping their possessions and hitting the road.

Some of the people profiled in the article, are doing the RV thing (and nothing wrong with that), but others, like Lynne and Tim Martin, 73 and 68 respectively, have become professional, homeless vacationers (that’s Lynne in the hammock above). A few years ago, they sold their three bedroom house, ditched nearly all of their possessions and are now hopping from country-to-country, embedding themselves in homes they usually find on Homeaway.com. She even wrote a book about their life called, “Home Sweet Anywhere: How We Sold Our House, Created a New Life, and Saw the World.” Ms Martin told the Times, “We simply traded the money we were spending for overhead on a house and garden in California for a life in much smaller but comfortable HomeAway rentals in more interesting places.” 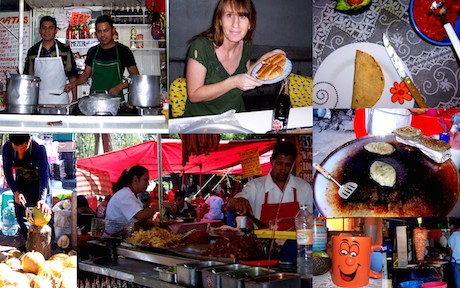 Others, like Stacy Monday (above collage taken from her site), have managed to induce retirement through extreme frugality. At only 50 years old, Monday travels the world, relying on Couchsurfing.com and volunteering on organic farms and nonprofits, all of which has enabled her to reduce her living expenses to virtually nothing. She told the Times she typically spends $150/month, an income that she can make through odd jobs and random donations on her blog Barefoot Lovely.

Danila Mansfield, 58, and her husband, Chris Gill, 64, are another RV-less couple who sold their home and possessions to travel and volunteer around the world.

The combination of old age and nomadic living, particularly in regions without the best healthcare, can present issues people who live near regular medical care don’t have–something that happened to Ms Mansfield, who had to deal with an acute respiratory issue whilst on the road. Needless to say, the very frequent flying lifestyle has its limits (though we suspect the way of life has numerous health benefits one doesn’t get from hanging around the same house year-in-year-out, thus extending the range of mobile years).

According to the article, there were 360,000 Americans receiving Social Security benefits at foreign addresses in 2013, which is 48 percent more than 10 years earlier. But more than having a foreign address, the article suggests that people of all ages are increasingly questioning the value of the large and over-stuffed American dream home. If this article has any relation to larger trends, and we suspect it does, in the coming years there will be a growing movement toward trading our ostensibly stable, large homes with their convenient-rich, but cumbersome possessions for itinerant, varied housing, lightweight and experience-rich living.