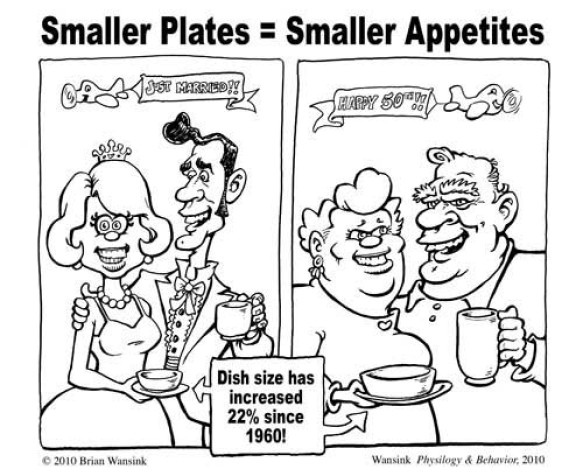 We talk a lot about the ballooning size of the American home, which has more than doubled in the last 60 years. But there is another, rounder item that has experienced a similar bump in size: our dishes. They have grown 36% in the last 50 years, and a growing body of evidence  (pun intended) suggests that big plates are leading to more waste…and waist.

Not only do we waste more, but we eat more than we need to with larger plates. 54% of American adults aim to finish all of the food on their plates. If you’re filling up 70% of your larger plate and licking it clean, the likelihood of overeating and gaining weight is much greater. A 200 household trial attests to this. People in the trial were randomly assigned to eat off of large and small plates. The people in the small plate cohort lost three pounds more than the big plated one.

Cornell’s Brian Wansink is a crusader of the right-sized dish. He’s written books with titles like “Mindless Eating: Why We Eat More than We Think,” and has even deigned to start a movement called, you guessed it, The Small Plate Movement.

You might think that a certain amount of self knowledge would go a long way here. Maybe knowing these figures, you would now fill 50% of your bigger plate. Wansink is not so confident, saying:

Most people are unwilling to acknowledge that they could be influenced by something as seemingly harmless as the size of a package or plate. Even when shown that larger packages and plates lead them to serve an average of 31% more food than matched control groups, 98% of the diners in four independent field studies resolutely maintained that how much food they served and ate was not influenced the size of package or plate they had been given.

As they say, nature abhors a vacuum. And just as large homes tend to be filled up with more stuff than we need, so too do large dishes. Wansink’s findings suggest we can’t just intellectualize corrective behavior. He said, “It is easier to change your food environment [dishes] than to change your mind.”

If you’re looking to eat less, try a smaller plate. Take the small plate challenge and eat your largest meal from a 9-10″ plate for a month (today’s standard plate is 11-14″). Don’t want to buy new plates? Eat off your bread and butter plate or buy a couple smaller plates from the thrift store and let us know how it goes.