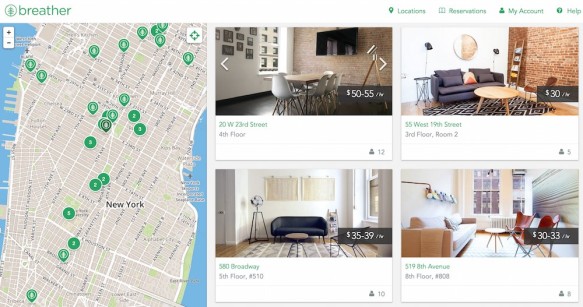 This site profiled the company Breather a couple years ago right after its launch. For lack of a more original description, Breather does for living and meeting rooms what Airbnb does for bedrooms. Via its site and app, Breather allows on-demand rentals of quiet, clean, wifi-enabled spaces in cities across North America. These aren’t places to stay for a long time; rentals are anywhere from 30 minutes to a day. These are place to work, have a quick meeting, meditate, breastfeed or simply get some quiet in an otherwise hectic day.

Today, Breather announced that it raised $20M of series B funding led by Peter Thiel’s Valar Ventures. This is a lot of money invested in a product that has no competitors or established market. Despite this–or perhaps because of this–the Breather capital influx may well be a harbinger of things to come, evidenced by its esteemed investor pool. If you’re not familiar with Peter Thiel, he cofounded PayPal with Elon Musk; he was the first outside investor in Facebook; he’s founded a number of other ventures that would be career-defining for most people to boot. He’s a man with a knack for seeing what’s next. So what does he (and a slew of other investors, it should be noted) see in Breather?

A few months back, I wrote a post called “Life as a Service (LaaS).” The concept of the post was based on the term Software as Service (SaaS)–an increasingly common model where software companies (Adobe, Microsoft, etc) charge a subscription fee for access to their software. The benefits of this type of service is that your software is forever current and you bypass many of the perils localized computing and storage. What I suggested is that this type of system can and is being applied to virtually every material need we might have, from cars to clothes to toys and more. In this model, things are accessed and subscribed to, not owned and paid for outright.

Yet I wrote the LaaS post with middling conviction, believing there were some things that would always defy shared or subscription-based ownership. You can’t very well subscribe to a living room, can you? But Breather shows that you can, and its continuation and growth are evidence of the growing catalog of things we may no longer own in the future. It also lends credence to the idea promulgated by Gunnar Branson about how real estate is being affected by Moore’s Law; through technology, we can access spaces that were once only available through ownership. Now we can use them only when we need them. Not only that, others can use the same space when they need them. This shared access has the potential to shrink our overall real estate needs, saving money, space and natural resources. It’s an exciting concept and one we look forward to seeing grow.