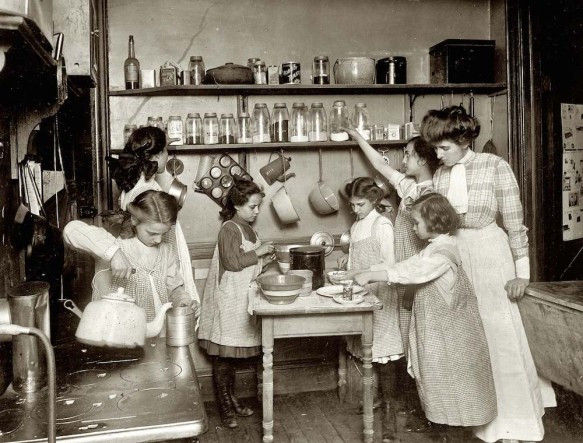 Ain’t Nothing New About Micro Housing

While tiny houses, micro-apartments and even transforming furniture may seem like recent phenomenon, the truth is quite the contrary: it’s big homes, excess space and stuff that are the new thing. People have been living in dense areas, in tight quarters with little stuff for eons. Nowhere is this more evident than in Manhattan. As strange as it sounds, there were over 600,000 more Manhattanites in 1910 than there were in 2013, 2.3M and 1.6M respectively. A recent piece in Curbed gives an account of the island’s various schemes to pack more people onto its 34 square miles. 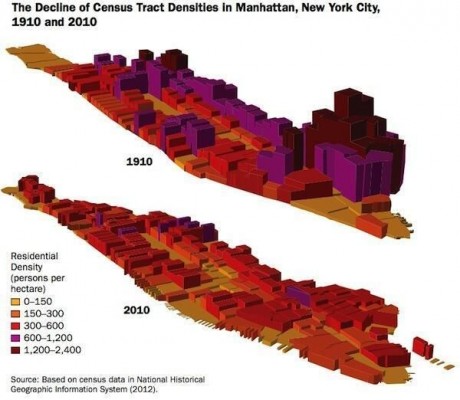 Curbed highlights the various housing typologies that have flourished in Manhattan. There was nothing sexy or, in most cases, safe about these often-improvised houses. 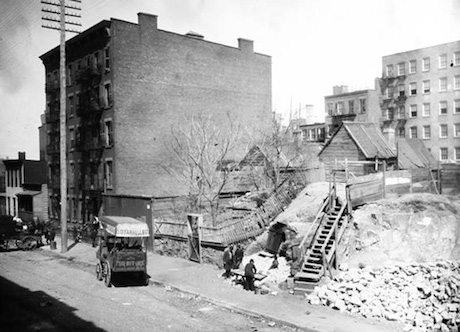 They write about the shanties that proliferated in the mid-19th century, saying of these rural dwellings (most of Manhattan was quite undeveloped), that they were “surrounded by picket fences, with muddy footpaths between them, and cows, pigs, or chickens outside [and]..They usually had just one room, about 12 feet square, which served all purposes for the family” (makes tiny houses seem huge!).

In the second half of the 19th through early 20th centuries, the tenement became new sardine can-home for the multitudes of immigrants flowing off the boats. Early tenements were often airless, windowless pits of disease and despair. Later regulations in 1867 provided some relief and led to the “dumbbell” building–named because its narrower interior shaft and wider front and back made their footprint resemble a dumbbell. These new buildings at least had a window in every room, but they were still pretty horrible with microscopic rooms shared by hoards of people. In one report, journalist and author of “How the Other Half Lives” Jacob A. Riis found 43 families where there should have been 16. 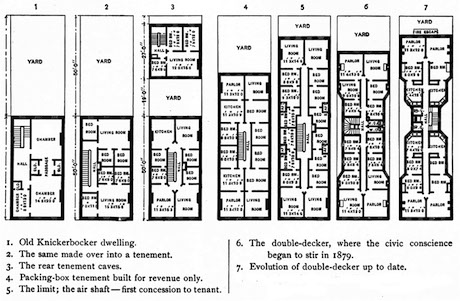 In 1901, the Tenement House Act helped helped birth much of the low-rise housing that still stands today. The Act required at least one 120 sq ft room per apartment, with additional rooms being no less than 70. Adults were required to have no less than 400 cubic ft of air space, and children 200. Rooms not only had to have windows–those windows had to have light and air coming through them.

Even though new regulations were in place at the turn of the last century, there were still far more of the old buildings, resulting in massive overcrowding and subhuman conditions for years to come. Eventually, as the new buildings proliferated and bridges and mass transit helped disperse populations across the five boroughs, Manhattan’s population began to shrink.

Head on over to Curbed for the full article.