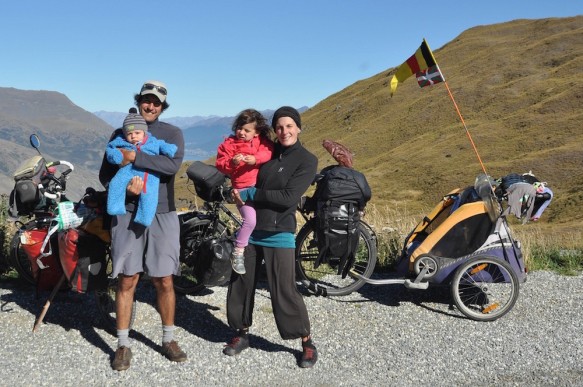 Few things will lighten your life like living on a bike. As the veteran of several long distance bike tours, I can attest how you quickly realize how little stuff you really need when you’re carrying it up a mountain pass. But living on a bike is not typically something you associate with raising children. It’s hard enough carrying your own crap, much less another human and theirs. But that’s exactly what Belgian couple Alice Goffart and Andoni Rodelgo did for seven years, traversing five continents by bike while raising two children.

In an interview with Icebike.org, Alice describes how it all started. They set out from Belgium in 2004 en route to Berlin. After a couple months, they realized they weren’t done. They kept trucking until Alice was seven months pregnant in 2007 with their daughter Maia. They took a break, spending a few years in Belgium, saving money and getting restless. They hit the road again in 2010. Alice said this of their motivation to leave with child:

We knew we just wanted to go now. By bicycle there is no need to plan anything, that’s the beauty of that transportation (maybe it’s the beauty of being unemployed and ‘homeless’ too)…You just leave, and that’s it, you are gone. 5 km from your home you are in a totally different reality, not knowing where you will sleep, with no destination, no role in society, no-one to prove anything to, no agenda and no timetable.

Shortly after their second leg, Alice became pregnant. When she was seven months pregnant, they camped out in Bolivia until the baby was big enough to stash in a hammock in the trailer. They continued for a couple more years, returning to Belgium in 2013 when Maia started school. 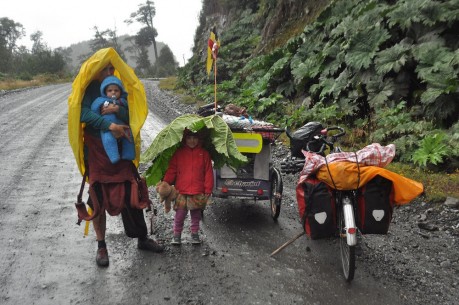 The couple was able to afford the trip through a combination of savings and extreme thrift. They said they only spent €20K in their first three and a half years. Even with the kids, they only spent €700-800/month, which they came up with through savings and various means like selling stuff and speaking engagements. She said this about the expenses in general:

I think as soon as you give yourself a budget you adapt yourself to it. We could have spent a lot less if we needed too. We treated ourselves here and there with a hotel room in south-America where it is not too expensive…I think the best way to save money is just to really have the need to do so. Then you will find the way. We spent the same amount of money in Norway as in China. The difference was that in China we went to a restaurant here and there or a guest-room, and in Norway we bought pasta and oats in an Aldy.

While Alice is pretty gung ho about her experience, she is quick to point out that you needn’t travel to have the freewheeling traveler’s mindset, and that everyone–and their family–must do what’s right for them. For now, they’re camped out in Belgium, but they plan they to hit the road before too long.