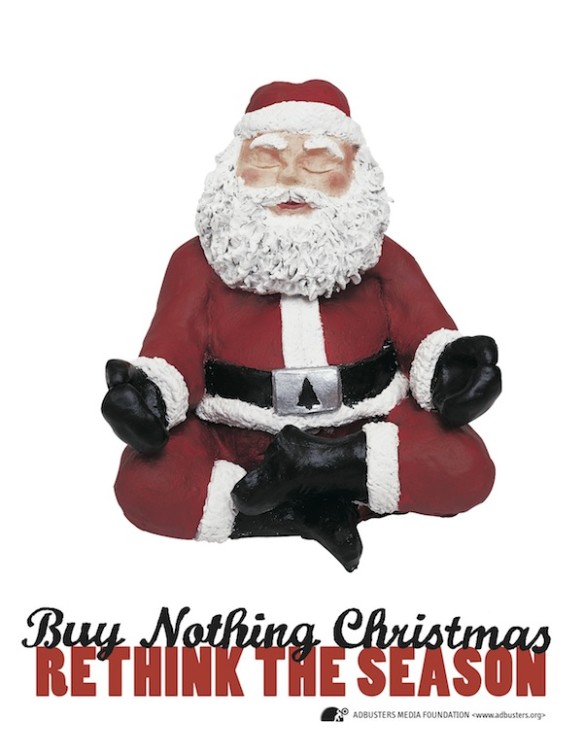 What Will You Buy this ‘Buy Nothing Day’?

While large swaths of the American population ready their sleeping bags for Black Friday, with its midnight store openings and 99 cent flat-screen TV’s, another population is sleeping through the night, honoring Buy Nothing Day (AKA “Occupy Xmas”).

BND is an anti-consumerism response to Black Friday, the Friday after Thanksgiving often regarded as the busiest shopping day of the year (November 29rd this year). Wikipedia says this about the BND’s origins:

The first Buy Nothing Day was organized in Mexico in September 1992 “as a day for society to examine the issue of over-consumption.” In 1997, it was moved to the Friday after American Thanksgiving, also called “Black Friday”, which is one of the ten busiest shopping days in the United States. In 2000, advertisements by Adbusters promoting Buy Nothing Day were denied advertising time by almost all major television networks except for CNN. Soon, campaigns started appearing in the United States, the United Kingdom, Israel, Austria, Germany, New Zealand, Japan, the Netherlands, France, and Norway. Participation now includes more than 65 nations.

Adbusters, a subversive anti-consumerism magazine with serious design chops, is promoting a number of BND activities such as Credit Card Cut Up, where you stand in a mall and cut up credit cards (yours and anyone else who’s game); Zombie Walk, a walk around a mall dressed as a zonked-out consumer zombie; and Whirl Mart, a listless conga line scooting around big box stores, driving empty shopping carts.

A less incendiary way of celebrating BND is to, well, buy nothing for that one day that you are expected to buy.

For the less-activist leaning, BND might seem like a middle finger to the status quo. This is true to some extent. Even if you don’t want to extend that longest of fingers, another way to look at the event is an opportunity to question your consumer habits. This holiday season, before we purchase, we can ask ourselves do I need to buy this? What is the impact of this purchase (for my own finances, for the environment, etc.)? Can I give another way like SoKind or Francine Jay’s “One Less Gift Certificate“?

One of the major issues with consumerism–one that BND tries to counteract–is not that shopping is intrinsically bad, but that we have been programmed to consume by advertisements. BND, Jay and others are trying to say that the holidays and even gift-giving are not inseparable with shopping and stuff.

How are you celebrating the holidays in non-shopping ways? Or what are you shopping for that takes shopping and gift giving off auto-pilot into a meaningful exercise? Let us know in our comments section.

This post originally published November 21, 2012. The dates have been updated to reflect this year’s BTD.