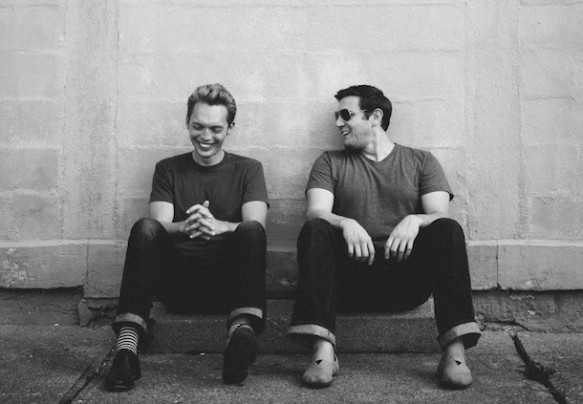 Meet The Minimalists at a Town Near You

Last week I attended the launch for a book entitled “Everything that Remains,” the latest by authors Joshua Fields Millburn and Ryan Nicodemus, aka The Minimalists. If you’re not familiar with The Minimalists, you should be. Through their site, newsletter and books, Josh and Ryan have established themselves as leading voices for living a life with less stuff and more happiness.

Their journey began a few years ago. To the outside world, the two childhood buddies were pictures of success: six-figure salaries at respectable jobs, big homes, nice cars, “more bedrooms than occupants” and lots and lots of stuff. Inwardly, something was amiss. They describe their situation this way:

With all that stuff, we weren’t satisfied with our lives. We weren’t happy. There was a gaping void. We discovered that working 70-80 hours a week for a corporation and buying even more stuff didn’t fill the void. In fact, it only brought us more debt and stress and anxiety and fear and loneliness and guilt and overwhelm and depression.

Following the death of his mother and the dissolution of his marriage, Josh stumbled upon “minimalism”–a philosophy that espoused subtracting superfluous stuff and adding meaning to one’s life. Josh’s dark events turned out to be the triggers for a personal transformation.

Ryan saw Josh’s transformation and wanted in. Whereas Josh took a more incremental approach to minimizing his life, Ryan took a crash-course. He conducted a “Packing Party,” packing up every single possession he owned as if he was moving. Over the next 21 days, Ryan would unpack items he needed. Whatever was left unpacked after that period was given away or sold (needless to say, there was a lot of unpacked stuff).

By 2011, Josh and Ryan had left their jobs and became full time bloggers and best-selling authors. Their new book, “Everything that Remains”, is a memoir of their journey from illusory success to real happiness.

I have been following The Minimalists for a couple years and have enjoyed their essays, which are free on their website. I got the chance to hang out with them before their launch event at Housing Works Book Store in Soho, NYC.

I wasn’t quite sure what to expect upon meeting them. All I knew was what they wrote. Ryan writes in a light, comic style, so I expected a light, funny guy, which proved to be the case. Josh, on the other hand, has a thicker, erudite style, which disposed me to think he might be a little heady. Nothing could be further from the truth. Both men greeted me with genuine warmth and big hugs. Both exuded an uncommon lightness and candor. If their attitudes were the byproducts of minimalism, I wanted in.

I spoke with Josh for a while, and though he conveys a distinct message to the world about stuff and the trappings of conventional success, he was very easygoing about how it might look for different people. He expressed that minimalism is really about what works for the individual, not a doctrine to abide by. He said that having one pair of jeans and living without wifi at home works for him, but might not for everyone. The oft-repeated word was “value”–keeping the things that bring value to our lives and shedding the rest. 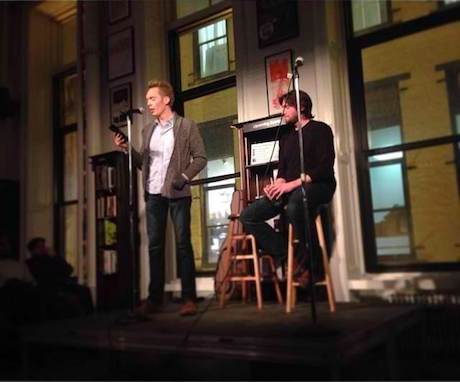 During the launch, the two read passages from their upcoming book, which they took pains to say is not a how-to, but rather a memoir told from the perspective of a man who embodies both mens’ journeys. After the reading, they took questions from an audience eager to know how the men made the transition from conventional to minimal. Topics like dating, getting out of debt and parting with sentimental objects came up.

I have yet to read the book, which will be released in January, but look forward to doing so. Starting in January, the two will be embarking upon a 100 City Tour to support the book. The tour will go through November and span the globe. Find a location near you here.

Josh and Ryan’s somewhat extreme approach to personal possessions might not be for everyone, and they are the first to say so. But they present themselves as humans who are living lives shaped around the things they hold valuable–a message that is both timely and universal.