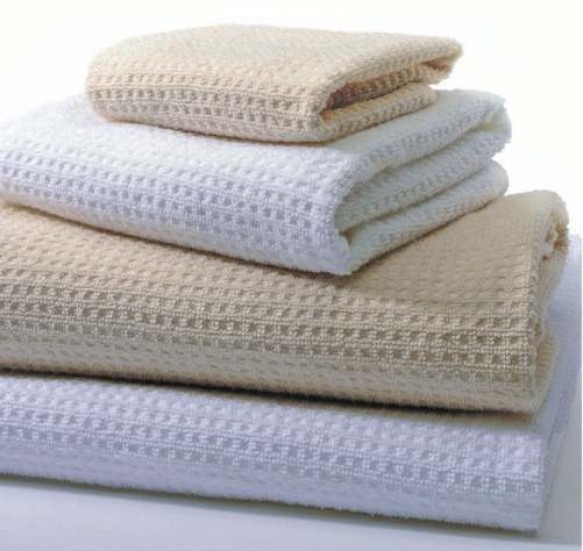 In our never ending quest to save space, we’ve found it’s often the small things that make the biggest difference. Case in point are towels. Many of us assume terry cloth is the only way to go for absorbent towels–its bulky texture seems a natural fit for absorbing water. But terry cloth’s loft takes up tons of space, dries slow (often getting moldy whilst drying) and takes up disproportionate space in the washing machine and dryer.

We came across a fancy sounding towel called nido d’ape in the book “Flanagan’s Smart Home“–author Barbara Flanagan’s wonderful book that lists 98 must-have housewares for the pared-down life. Nido d’ape simply means “bee’s nest” in Italian. Americans call them waffle towels. The shallow cavities in the fabric effectively increase surface area, wicking more water with minimal increase in bulk. They take up a fraction of the volume of their terry cloth brethren, dry much quicker and absorb amply.

We’ve been using waffle towels in the LifeEdited apartment and have been impressed by their performance. Author Barbara Flanagan warns the towel’s feel is “bracing,” and they lack the “security blanket-like fluffiness” of terry cloth. That has been our experience as well. The towels grip your skin. Her solution: “Grow up. Persist. There will be lighter loads of laundry filling fewer baskets straining fewer appliances.”

We’ve been using the Aquis microfiber towel, thinking that the synthetic material would dry quicker. It does, but we also noticed that if they are not dried off quick, they get a funky moldy smell.

This author uses a cotton variety from Gilden Tree. While they don’t have the squeegee feel of the Aquis, the towels do dry both your body and themselves quickly. The cotton is not nearly as odor retentive as the microfiber.

We also experimented with a smallish 19 x 39″ size, thinking the ability to wrap it around the waist would be sufficient. It wasn’t. It barely fit around the waist and was barely deep enough for men, much less women. The larger 29 x 55″ size proved much better and the bulk when stored is about that of a terry cloth hand towel.

Flanagan blames the excesses of the 80’s for the “hotel towel”–essentially a piece of terry cloth that could house a Bedouin village–becoming the household norm. The only problem is that if you lack daily maid service and a store-room, these towels make no sense. Waffle-weave towels do, saving space and energy while doing what they’re supposed to do: dry.

[Note: this post was originally published on August 9, 2012. After a couple years of use, we made a couple refreshes to the article.]