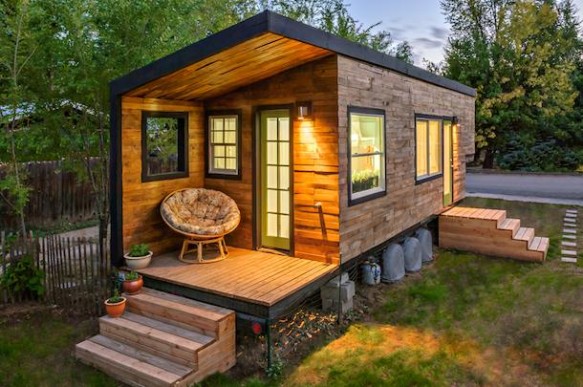 Turn On, Tune In, Get Tiny

To live in a tiny house is as much political statement as it is architectural one. Take the NOMAD tiny house–its whole raison d’etre seemed to be stopping its owner from living the highly-leveraged, consumerist lifestyle. We can now add Macy Miller to the pantheon of tiny house political heroes. Over the course of 18 months, the architect-to-be documented the construction–and constructed–her own 196 sq ft, trailer-mounted home for $11K ($2K of which was for the composting toilet). The home forced her to make revolutionary changes to her relationship with space and stuff (i.e. using a lot less of it). And her monthly operating expenses of $250 allow her to do whatever she wants with her life without the economic pressures most homeowners suffer.

The place is a refreshingly modern take on the tiny house, many of which resemble little houses that, had they been around 130 years ago, would have been located on prairies.

Miller received a lot of press in the last year. Many of the stories cited foreclosure and divorce as the motivation behind building the place. But a little digging around her blog revealed a more intentional shift. Her divorce and foreclosure happened several years before she began her tiny house. She could have paid the mortgage, but because of mismanagement by the bank, she was forced to foreclose (she subsequently won a lawsuit against them). In other words, she wasn’t forced to downsize–she wanted to.

Her blog tracks her story in great detail. The latest chapter is her baby, which is due in a few month. She blogs extensively about the many, supposedly-mandatory baby items she is doing without, both by choice and spatial necessity. Before you ask, the father (who is not the ex) will not be living in the tiny house with Miller, child and her great dane Denver (who she assures is not suffering because of the small digs); he will be involved with the child’s upbringing in case you were worried.

Like many tiny house advocates, Miller freely admits 196 sq ft will not work everyone, but seems quite adamant that it works for her–a stance that makes a lot of sense to us. See more Minimotives.com