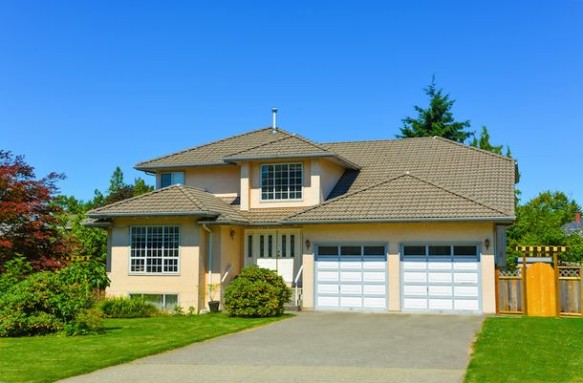 Misery, Apparently, Does Not Love Company

Thinking of moving to the burbs or the country? Want a little more room to spread out and raise the kids? Want to feel safer and more secure than you do on the city’s mean streets? Well, you might want to think again. A growing body of research suggests that moving away from the city may be a move fraught with peril and insecurity. Here are some of the possible threats of moving out of town:

Suicide. A paper by Cornell researchers has found a strong correlation between low density and suicide, particularly for people aged 15-19 as the below chart suggests. 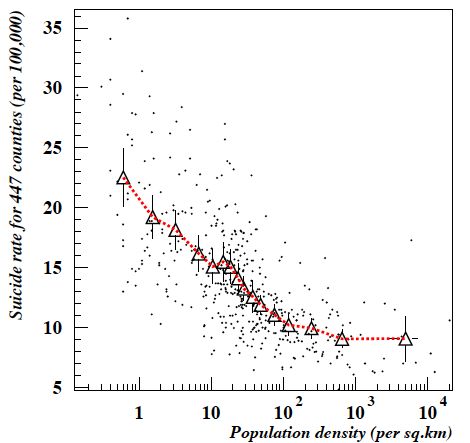 This correlation holds true almost everywhere around the world. Countries such as France, Canada and Japan showed a similar connection between suicide rates and density.

Though there is no definitive explanation for why this is the case, an article in Atlantic Cities speculates that the reason is akin to the biological phenomenon called apoptosis, where cells “isolated from the group begin to self-destruct.”

Death. Many people’s notion of the city is forever associated with Charles Bronson riding the 1 Train at midnight. If we just escape to the bucolic burbs or countryside, where people trade their switchblades for hedge-clippers, we will be safe. Not so says a study by researchers from the University of Pennsylvania and the Children’s Hospital of Philadelphia. 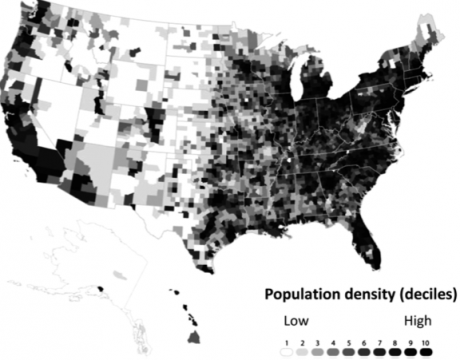 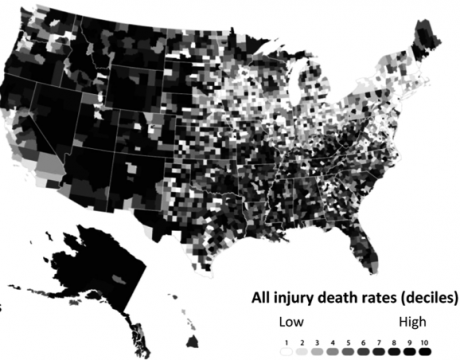 While certain urban environs have significantly higher homicide-related death rates than the national average, the overall likelihood of non-illness-related death are considerably higher outside the city, as another Atlantic Cities article reports:

That risk [of dying from urban homicide] is far outweighed by the fact that you’re about twice as likely to die in a car crash in rural America than you are in the most urban counties. Nationwide, the rate of “unintentional-injury death” – car crashes, drownings, falls, machinery accidents and the like – is about 15 times the rate of homicide death. Add together all the ways in which you might die prematurely by intentional or unintentional injury (as opposed to illness), and your risk of death is actually about 22 percent higher in the most rural counties in America than in the most urban ones.

Upward mobility. A NY Times editorial by Paul Krugman called “Stranded by Sprawl” suggests a third threat of moving to the outskirts: Unemployment and lack of opportunity.

Citing a new study by the Equality of Opportunity Project, Krugman points at Atlanta, a city he refers to as the “Sultan of Sprawl.”

Though Atlanta has recently experienced an enormous population growth suggestive of an economic boom, its citizens’ likelihood of upward mobility is the same as Detroit, a city whose economic woes have made it the epitome of urban decay. Krugman asks:

So what’s the matter with Atlanta? A new study suggests that the city may just be too spread out, so that job opportunities are literally out of reach for people stranded in the wrong neighborhoods. Sprawl may be killing Horatio Alger.

In other words, what good is opportunity if you can’t get to it?

Needless to say, this is not a topic for over-simplification. Not all suburbs or cities are created alike and there is surely a lot of noise in all of these studies.

And we won’t suggest that people only move out of the city to find a better life. Many people are moving to the outskirts because the city centers have become prohibitively expensive.

But there are many who still see the suburbs as havens of safety and security. For them, these studies should provide plenty of food for thought. Maybe it’s safety and opportunity–not misery as always thought–that love company.