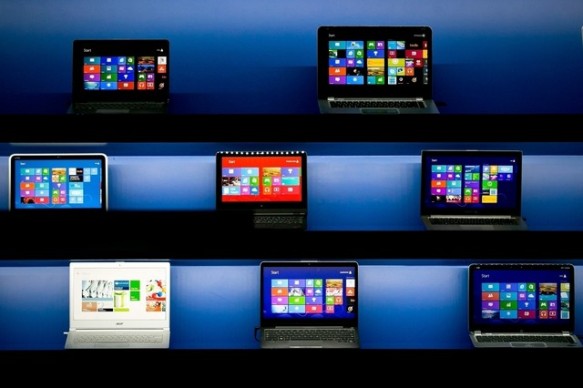 Opinion: Do We Need Anything From the Consumer Electronics Show?

If you’re even remotely a techie, you’re aware that the Consumer Electronics Show (CES) was held in Las Vegas this week. The TVs, game consoles, phones, tablets, and phablets (no, we’re not making that up) of tomorrow are there on display today.

We love the things technology makes possible. We love that our mobile apps do the duty of tons of useful tools. We love that Spotify and Netflix allow us to ditch our CDs and DVDs while giving us access to far more media than we could ever acquire in a lifetime. We love how our eReaders allow us to take our libraries anywhere. All of these things depend on the kind of hardware seen at CES.

The consumer tech industry has a lot to do with Moore’s Law, which says that the number of transistors that can fit on an integrated circuit doubles every two years; it’s a law that has held true for the last 50 years and shows no sign of abating. It has made technological advances occur at breakneck speeds–tech that was state of the art five years ago is considered garbage today. No other industry can say that–not cars, furniture, energy…nothing.

But what about us, the users? Can we keep up with the number of choices and options available? Are we better off with these choices at all?

An insightful article by Treehugger’s Jaymi Heimbuch entitled “CES 2013: The World’s Largest Electronics Tradeshow, Buddhism, and the Illusion of Choice,” waxes about the existential implications of CES. She writes:

We produce too much stuff to the point of redundancy and even ridiculousness. The consumer electronics industry is bound up in this truth: the myriad choices we are given as consumers of gadgets is pure illusion. Instead of freedom through modern gadgetry, we are unwittingly made increasingly unhappy by it.

We’ve explored this philosophical terrain before, asking how less choice might be the route to greater happiness, and conversely how greater options can often make us miserable. While we aren’t at CES ourselves, we imagine the available choices could paralyze someone who just wants a new phone.

While sitting out the tech arms race seems like the way to go, many of us depend on technology and appreciate its applications. As such, we’d just assume our tech be faster, lighter, more efficient, have better sound and display and so forth. We prefer our Samsung Galaxy III to a Palm III. These newer, better devices and all the things we can do on them would not be possible if companies–the same ones on display at the CES–had stood still technologically.

But how do we stop ourselves from stepping on a technological hedonic treadmill, where we get the fastest, thinnest, sexiest device, only to start lusting after the next model released a couple months later?

In our previous post on choice, we looked at the website The Wirecutter, which gets experts to declare a best device in any given category–e.g. best laptop, SLR, external harddrive, etc. If you take their advice, you have the opportunity to eliminate a lot of choice as well as benefitting from their expertise.

One of its contributors, Brian Lam, wrote an opinion piece in the NY Times called “Knowing When It Pays to Upgrade Your Gadgets.” It’s a clearheaded look at how to evaluate if you actually need a new piece of tech hardware.

Lam’s conclusion is basically different people have different tech needs. A graphic designer will need to replace her computer more often than a plumber. He does say that some things, like tablets, seldom need replacement for anyone. He also gives this overarching statement, which, from a tech writer, sounds pretty sage:

No one has ever regretted waiting as long as they can to upgrade their technology. We’re a nation of shoppers, tempted to buy the best at every turn. But I’ve found that the best way to avoid a premature upgrade is to remember what you might be giving up: a trip to a tropical getaway, a new suit or perhaps a down payment on a new bed that will help you sleep better. That kind of context makes it easier to pause and realize the grandest truth with upgrades: If it isn’t broken, stolen or lost, maybe you don’t need a new one just yet.

How about you? How do you balance your technological needs with the endless array of upgrades, faster models, etc.? We’d love to hear your opinions.