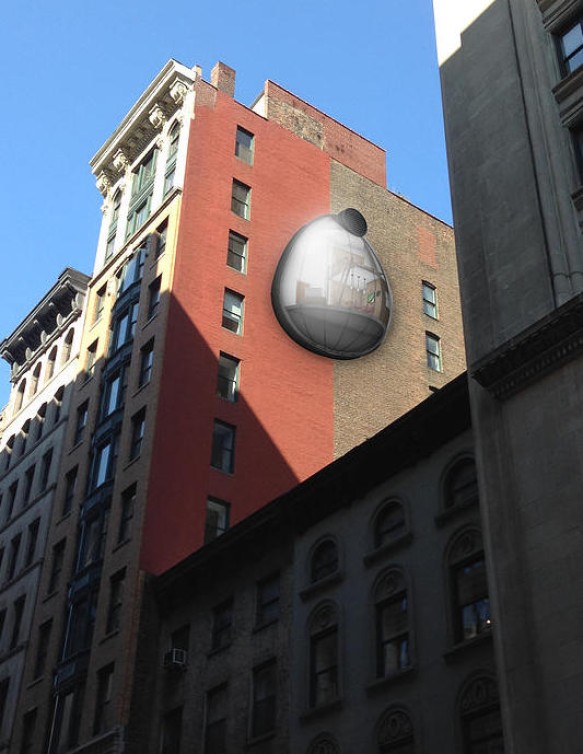 One of the more interesting architectural tactics for increasing urban density and housing stock is using spaces that are often ignored or thought un-developable. This is the idea behind Michael Perry’s Cliff Swallow Apartment, the recent winner of the AIA Future of Architecture Award in the Social Impact category. It’s an apartment that sticks to the side of existing buildings, ostensibly increasing density and providing affordable housing in expensive NYC neighborhoods.

Perry envisions the teardrop-shaped units being accessed via penetrations cut into the side of buildings along their circulation paths (stairs and elevators), though he says they could also be adjoined to existing units, increasing their square footage. If the units were ever removed, a simple brick patch up would be all that was needed to restore the host building to its former glory. Perry says that units could temporarily lease air rights above neighboring buildings, “creating a mutually beneficial relationship between the new unit and the existing building below.”

Though the structure looks solid, the shell would be flexible and kept rigid via an air compressor.

I do have some questions that I’m not sure need to be answered. Where do the plumbing stacks go? What is the R value of the shell–it better be good with full blast sunlight or winter winds belting its side? And though this is designed to provide low cost housing in expensive neighborhoods, what’s stopping someone for charging a fortune for a Cliff Swallow Apartment?

Like I said, these are questions that are not necessarily important to answer. As much as practical strategy for adding affordable housing, the Cliff Swallow Apartment is an exercise in imagining world’s that could be if we let go of conventional architectural thinking.