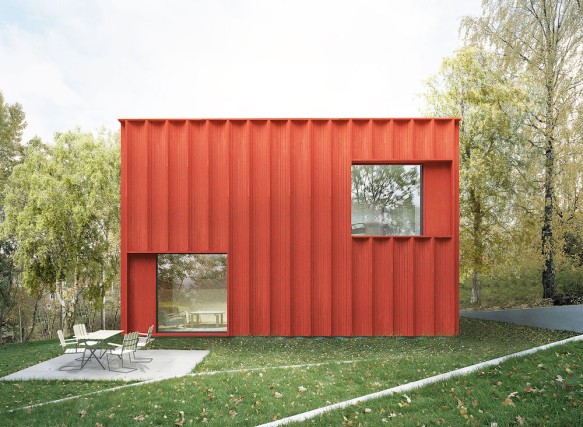 The House That Data Built

One of this site’s most visited posts is entitled “Residential Behavioral Architecture 101”. In it, we looked at a thermal map taken from the book “Life at Home in the 21st Century.” The map showed the daily movements of one family through their house in the course of a normal day. What it showed was that only a small portion of their home’s overall floor space was used. We asked the question: what would residential architecture (or any other I suppose) look like if designed around how it was really used, not just how convention dictated? Why build a 3K sq ft home when data says that only 800 are used on a consistent basis? Sweden’s Tham & Videgård Arkitekter has taken a similar approach to data-driven design with their Hemnet Home. Although rather than designing based on use-data, they based the home’s design from data gathered from users of Sweden’s top property website.

From Tham and Videgård’s site:

The Hemnet Home is a data experiment to lead the way for a new type of architecture. After analyzing 200 million clicks and 86 000 properties on Hemnet – Sweden’s most popular property site – Hemnet asked Tham & Videgård to create Sweden’s statistically most sought after home.

As Lloyd Alter remarked in Treehugger, it’s pretty amazing that the final design was only 1115 sq ft with three bedrooms and two baths. These proportions were based on aggregated data from Hemnet visitors. Along with the statistical data, Tham and Videgård sought to combine “the rationality of the functionalistic box…with the quality of craftsmanship and material presence of the Falu red cottage”–the two dominant archetypal models of Swedish home design.

Almost all of the houses materials and finishes were dictated by data. The modern furniture is in shades of grey because “three quarters of the most clicked properties on Hemnet have sofas in grey, white, black, brown or beige shades.” The main common space features an open plan because it “is more popular than a separate kitchen, with 57% of the studied properties having an open plan layout.” There’s a cool cutout terrace on the second floor that approximates a balcony because “‘balcony’ was also the most popular search word on Hemnet during 2014 with 411 167 searches.”

While the process could be seen as too much head and not enough heart, the final product is pretty gorgeous in my opinion. It would be great if the design could be informed by user-data as well–factoring not just how people want it to look, but how they likely use it. But generally speaking, the project opens up a lot possibilities for a new wave of architecture designed around what people want, not just what they’re offered.