Few things are more problematic when decking out a small space than kitchen appliances. The right-sized ones tend to be designed for college dorm rooms–crummy finishes and features, manual defrost freezers. The right-quality and design ones tend to be made for 1000 sq ft McKitchens–doublewide fridges, 16 burner stoves, plate warmers. But some appliance makers seem to be waking up to the growing need for high-quality, high-functioning kitchen appliances suitable for small spaces. GE is one of those companies. They have designed a prototype kitchen that fits into a mere six foot space; they are also holding an open competition to find the best small space kitchen designs the crowds can muster.

The prototype kitchen includes all the appliances you’d expect of a full-service kitchen: induction cooktops, sink, two cooling drawers, dishwasher and microwave/convection oven. The unit was designed so it would only require one water line, which builders will appreciate. The only thing that’s not clear is if there is any storage. But because all of the appliances fit below counter, adding top cabinets would be quite easy. The whole thing will cost around $15K.

As mentioned, the prototype kitchen (video above) is part of a bigger effort by GE, which includes a  competition in partnership with FirstBuild, a crowdsourcing appliance-design platform (bet you didn’t know there was one). The public is being asked to submit designs for a kitchen that fits into a 7′ x 25″ footprint; they must include a refrigerator with freezer, cooktop, oven, microwave, dishwasher and garbage disposal. The Wall Street Journal says GE will release plans for the prototype kitchen later this month, so people can modify and improve upon the design (we’re not exactly sure how this sequence will work as submission deadline for the competition is June 23rd. Why wouldn’t they release the prototype before the competition so designers could work the appliances into the designs? Just sayin’). 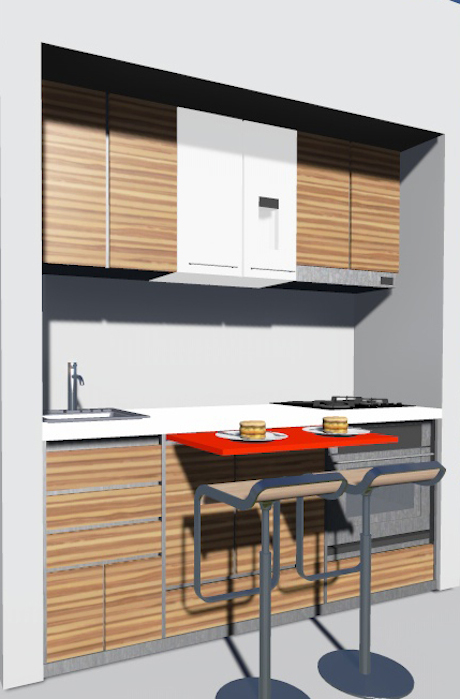 There are currently 12 submissions like the one above; the top four will receive $2500 each. Following the competition, GE plans to begin production on a one-stop-micro-kitchen as soon as later this year. We’ll keep you posted as that happens.