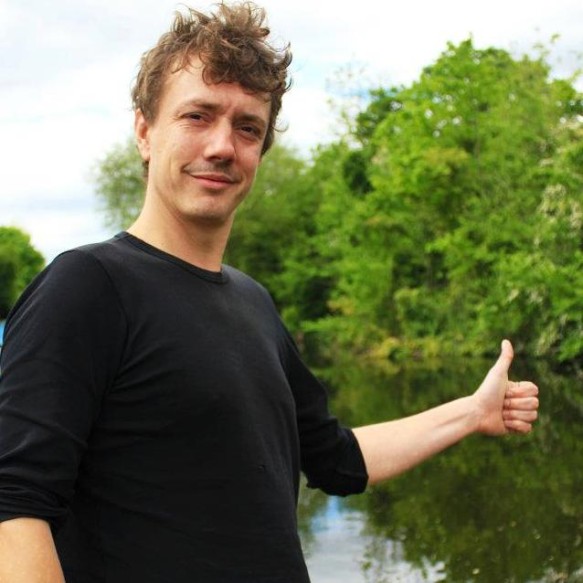 My Other Car is a Thumb

Predictability is the promise of the all-inclusive vacation. Show up at a resort, unpack your bags in a clean room with fresh sheets, go downstairs for a daiquiri and a Belgian Waffle buffet (I’m imagining what these places are like as I’ve never been to one), sit by the pool, eat some more, go to sleep, repeat, fly home with a tan. But is predictability such a great thing? Do you want your most exciting story to be about running out of sunblock? If you’re looking for something outside of the predictable, we suggest you check out pro traveler/filmmaker Andrew Grady. For the last four years, he has been traveling the world, hitchhiking and documenting adventures that are anything but predictable.

The Magic Thumb project began in a pub, as many great ideas do, in 2009. The idea was to hitchhike across the globe, documenting the process and show “how, with the right aptitude, resources and optimism, anything is possible, and that really, humankind on the whole, are pretty accommodating.”

Grady has completed two trips so far. In 2010, he hitched from London to South Africa, and in 2012, he hitched from Australia to London. He is currently on his third and final trip from London to Brazil. If you didn’t guess, each destination is related to a major sporting event: two World Cups and an Olympic Games. Grady’s ability to arrive at these events in time provides much of the drama. For example, so far as we can tell, Grady is on a freighter right now somewhere in Alaska, while the Rio World Cup is well underway.

Because it’s hard to hitch a ride in a car across an ocean, many legs of Grady’s travels include hitches on freighters and private sailing vessels. A trip out of Perth, Australia on a man’s sailboat was forced to make a weather-related retreat, putting him back at his point of embarkation 23 days after he began the 98 day trip.

Grady gives regular updates on his website (which I found a little confusing. His Facebook page is easier to navigate). They show his journeys, filled with those “accommodating” people and misadventures. His ultimate plan is to make each journey into a “trilogy of adventures” released in rapid succession in 2015 (see trailer above). He is raising money through an Indiegogo campaign to help offset some of the filmmaking and distribution expenses.

Few modes of transportation outside of walking are as edited as hitchhiking. It allows people to travel great distances using transportation that was going that way anyways. Hitchhiking has fallen out of favor in the US as both daily and long-haul transportation (though it’s still legal in 44 of 50 states). But it is alive and well in many countries; in some, like Holland and Israel, it is even institutionalized with special kiosks and stands for hitchhikers looking for rides.

The big question for most is safety. According to Wikipedia, there is not a good body of data about hitchhiking safety, though a study conducted in 1974 (when hitchhiking was more commonplace) by the California Highway Patrol found that hitchhikers were no more likely to be victims of crime than anyone else. Another German study found that hitchhiking is far safer than what common perception would suggest. We suspect if an incident were to occur to a hitcher or driver whilst hitchhiking, there would be a disproportionate outcry against the practice in general.

Hitchhiking might not be for everyone. For example, hitching a ride with a spouse and kids, though it surely has been done, might prove tricky. But if your lifestyle lends itself to mobility and flexibility, consider hitchhiking as a part of your travel plans. Before you book your weeklong stay at Sandals Corpus Christi, remember that life–at least its interesting parts–typically happens getting from point A and B, stuck in the mire and, occasionally, broken down.