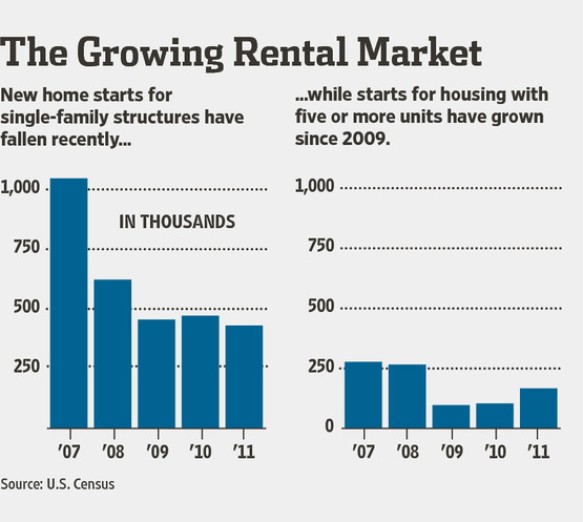 Can the American Dream be Rented?

For many years, the American Dream has centered around home ownership. The logic follows that you buy a home, lay roots and live in your biggest investment, which, more often than not, appreciates in value.

In the last few years, this dream has become a nightmare. The mortgage crisis created a class of defaulters, and the ensuing recession made down payments and financing near-impossibilities for most. Moreover, our mobile job market made the tether of a home more of a liability than asset.

According to a Wall Street Journal article by Daniel Gross called “Renting Prosperity,” these factors have triggered a shift away from the ownership ideal. He says:

In the American mind, renting has long symbolized striving—striving, that is, well short of achieving. But as we climb our way out of the Great Recession, it seems something has changed. Americans are getting over the idea of owning the American dream; increasingly, they’re OK with renting it.

The facts bolster his argument: home ownership is down, while rentership rises; and multi-unit buildings–most of which are used for rentals–have increased in production over the last few years while single units are declining.

He also explains that for many, the idea of ownership is mostly that: an idea. The reality is that people simply rent from the banks, whose “rent” comes in the form of interest and fees. This begs the question, if there is little, no or negative cost benefit to owning, why do it?

We’re big fans of rental/sharing services such as Zipcar and Rent-the-Runway. They allow you to use products by the hour, rather than paying a hefty and often unnecessary retainer fee. The author Gross points to these services as indicators of a changing attitude to rentership–that people increasingly care more about using than owning. The question is whether this a good system for housing, which for most is something they want to have all the time.

Like cloud computing, where all data is stored online and accessed when needed, could our world be moving away from the model of all-the-time ownership to on-demand access? On the one hand, this could lead to fewer people laying roots and improving their communities. On the other hand, it could lead to smarter rental homes and renters–the Strand East planned community is a good example of that.

What do you think? Do you think we should be living in the cloud or on the ground?