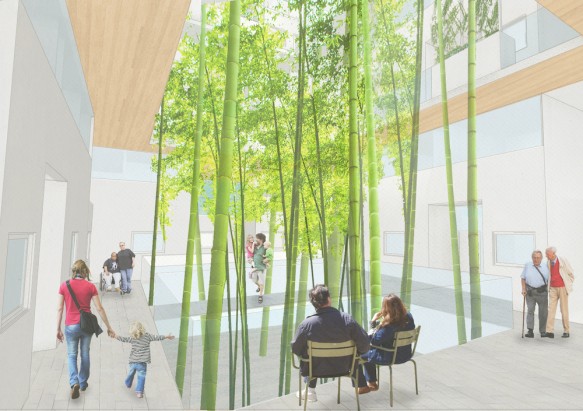 A Village in a Tower

Image above by Rachel Kao.

While Europeans are no strangers to communal, urban living, evidenced by things like Baugruppen, the phenomenon is still pretty rare in North America. Cohousing, the most established form or communal living this side of the pond, tends to be located in the burbs. In these communities, several single family houses band together to create a cohesive community with regular shared activities and spaces. There are some urban exceptions such as Durham Central Park Coho. But developing a building like Durham Coho is a time and resource intensive affair. Now a group out of Vancouver calling themselves “Our Urban Village” has come up with a clever middle ground approach to creating communal living in the city. Rather than developing their own building, they’re seeking to graft their community onto an existing development.

The group calls their concept “”co-housing lite”. Rather than originating the development, the group would commit to buying several units at market value (~C$700/sq ft at the moment) of an in-progress condo building. This influx of cash would give the developer investment capital as well as cost savings down the road as pre-sale and marketing expenses would be minimized. In return, the developer would build common spaces such as shared dining and guest rooms for the community. While these added features might seem like a big hit for the developer, co-founding member James Chamberlain told the Globe and Mail that developers see the expense as fairly small relative to the overall costs of developing the large buildings their interested in. 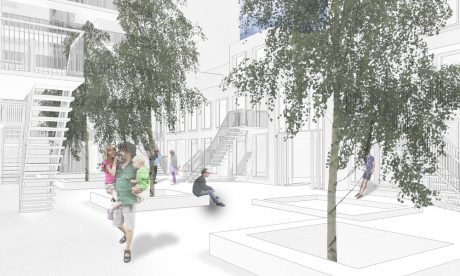 The community is being smart with design of those common spaces. Another member, Kathy Sayers, wrote that OUV “will be working with a German architect and Resource Furniture to design our common space to make 1200 square feet work for our 20-30 families instead of the average 2000-2500 square feet.” That same architect, Inge Roecker, is an associate professor at the University of British Columbia and gave her students the task of concepting the community. Ultimately, we suspect, the look of the spaces will be largely dictated by the building’s preexisting architecture.

The group is presently courting a number of Vancouver developers. Because of their unconventional approach, Chamberlain said the ideal developer will be one with a “social conscience”.

The community wants to be multigenerational and their current membership of nine represents several demographics including singles and couples with and without kids. They’re shooting for 15-30 households total for the community. Before you become a member, OUV has a three month getting-to-know-you period to weed out people who might not be into the sometimes involved nature of cohousing. When that period is over, members pay a C$500 membership fee and are responsible for paying for their units.

While designing a building from scratch to facilitate a shared living experience is perhaps ideal, many people with jobs don’t have the time to commit to such an undertaking. Co-housing lite provides people interested in this way of life, ones who don’t want to live in single family housing, a way to create their community without the burden of being amateur real estate developers.