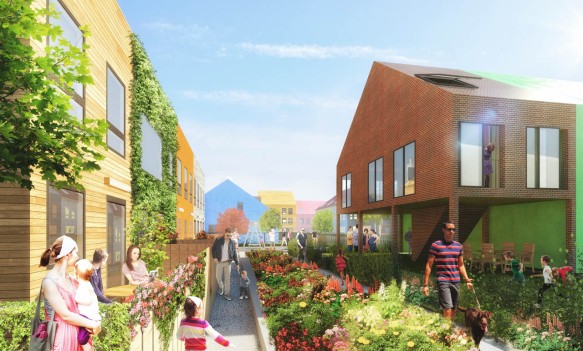 A Suburb that Puts People First

One of the biggest demerits of suburban living is how they can have an isolating effect on people who live in them. When most suburbanites leave home, they enter a car that’s usually in an enclosed garage where you often drive to another garage at work or the store or wherever. In cities where garages are less common, you leave your home and you’re thrust into contact with your fellow human. We’ve looked at Pocket Communities before, which are communities of single family houses where the front door faces a commons area, fostering a more social living environment. And we just ran across this new suburban development in Mannheim, Germany that puts the humans first in its design. The development, which has many of the hallmarks of suburbia like single family homes and yards, has two notable things missing: cars and parking. 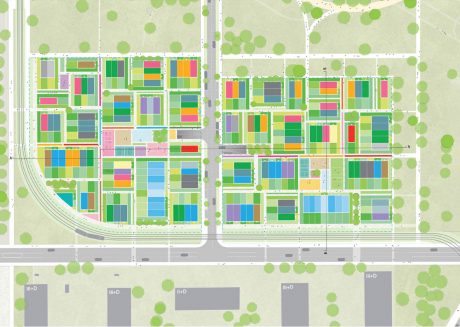 Johannes Pilz, one of the architects behind the project told FastCo.Exist:

By getting rid of the cars, you then open up the streets, whether it’s for children to come out and play with each other, or to encourage residents to sit outside their house, chat with one another, or go for a stroll…By getting rid of the [pavement] barrier between households, you then increase interactions between neighbors, and the community then starts to bond.

The lead developer, MVRDV, specializes in affordable housing. The development is designed to avoid gentrification by creating a diversity of housing types as well as taking a modular approach to construction. Residents will be given a catalog of houses to choose from of various sizes, heights, etc. Instead of each house representing a custom design, many are reconfigurations of basic building blocks, streamlining design and construction processes and cutting costs. 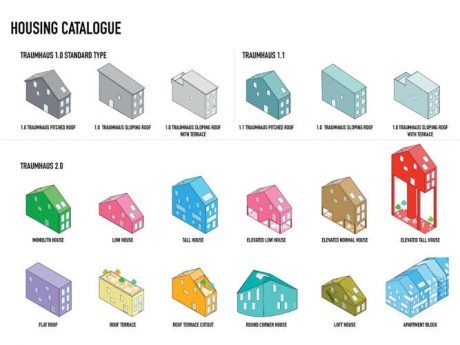 The development, which will be built on an old US Army barrack, is also next to a tram stop, so people who commute into the city could live car free if they so chose. There will be underground parking available however, for residents who want a car and for emergency vehicle access. 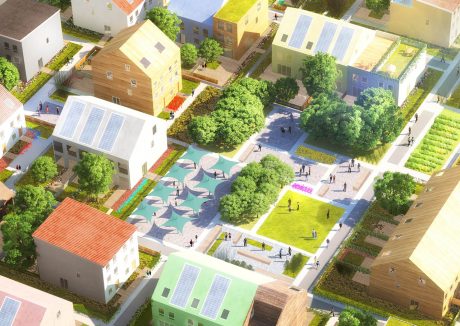 Some of the promises of suburban life are safety and community, but because many suburban developments design more around cars than people, those ends are often not achieved. The design of this development shows what can happen when people come first, and  we think it looks pretty great.