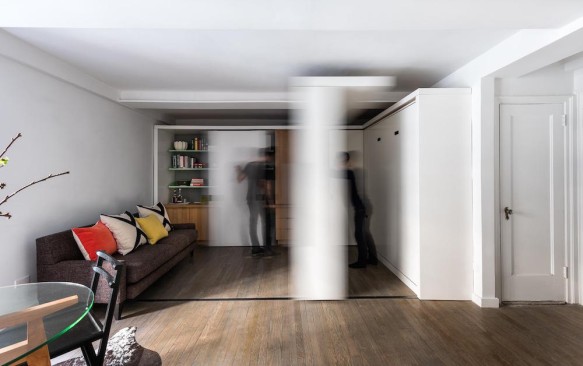 Architect Michael Chen has one of the most impressive portfolios of small apartment projects in the United States, if not the world. “Although we [MCKA, Chen’s firm] work at a broad range of scales, we are fascinated by the design of small spaces because they demand inventiveness,” Chen wrote to us in an email. “We love taking on a complicated and difficult problem with the intent of creating solutions that are thoughtful, beautiful and deceptively simple.” His latest project, dubbed the “5 to 1 Apartment,” is a beautiful representation of his love of transforming the complex to simple. It is also, to my mind, his finest work to date.

Similar to the LifeEdited apartment, “5 to 1” incorporates a moving wall to provide additional “rooms” for the 390 sq ft Manhattan apartment. The wall, which was custom fabricated by Trak-Kit, is fully motorized and has power as well as cable for television and audio. The wall also houses networking components and audiovisual equipment, which includes a TV that rotates 180 degrees to face either side of the wall.

When the wall is in its closed daytime position, the space has a generous living room. When the wall is opened, it creates a space that can be used as a changing or bed room, depending on whether the queen-sized wall bed is lowered. The interior wall that is perpendicular to the moving wall is lined with a volume that contains a desk on one side and a wardrobe on the other.

Other improvements include an expansion of the kitchen to include more work space, a renovation of the existing bathroom and LED lighting above much of the cabinetry.

One of the main things this apartment gets right is its ability to merge normal, freestanding furniture with built-in components. The inclusion of a normal sofa and small cafe table make the space feel lived in and personal, yet the built-in components keep an overall clean aesthetic and give the small space amazing functionality.

What’s also notable is that this level of creativity was placed inside an almost 100 year old building. “Even as it is undergoing tremendous change, New York City anticipates that 80% of the existing building stock will be in use well into latter part of 21st century and beyond,” Chen wrote. “Cities worldwide are transforming rapidly due to increases in population density, climate change and rapid changes in technology but the architecture of the future is in large part going to emerge around intelligent ways to bring the existing fabric of the city into that future.”