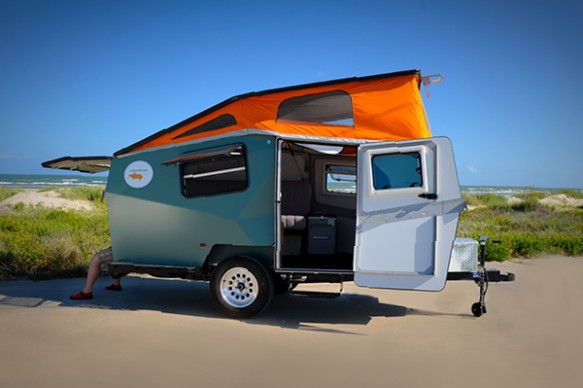 Your Own Terrestrial Spacecraft

Shipbuilders might know a thing or two about optimizing tiny spaces, but their skills pale in comparison to those of spacecraft engineers. There isn’t any other type of mobile home where space is so important (pun intended). When your odometer registers in tens-of-thousands of miles, carrying even a square millimeter of extraneous volume makes a big difference in efficiency. It’s with that sense of lean design that Garrett Finney designed the Cricket Trailer.

Before designing the Cricket, Finney worked as an architect and designer for NASA, working on their habitation modules–the place where astronauts live, bathe, sleep and eat. In other words, he was a “space” architect. The Cricket’s stripped down interior, replete with lots of machined aluminum, shows vestiges of Finney’s aerospace roots.

The $17K Cricket has all the basic features of a traditional small trailer including a indoor/outdoor shower, toilet, queen size bed that doubles as banquette seating and a cooking area (custom options are available). The Cricket does not, however, include a HAL computer.

Where Finney’s aerospace background really shines through is the Cricket’s weight. At a mere 1300 lbs, it doesn’t require a special vehicle to tow it the way many trailers do.

Finney explains on his site that he was an avid backpacker, but having children made that endeavor much more difficult. The Cricket Trailer was his solution for creating family-friendly adventure without the logistical issues. And while having a trailer might seem like a big piece of stuff, consider it could effectively be a family’s vacation home. The fact that it uses a normal car and could be shared with another family could make it one worthwhile piece of stuff.