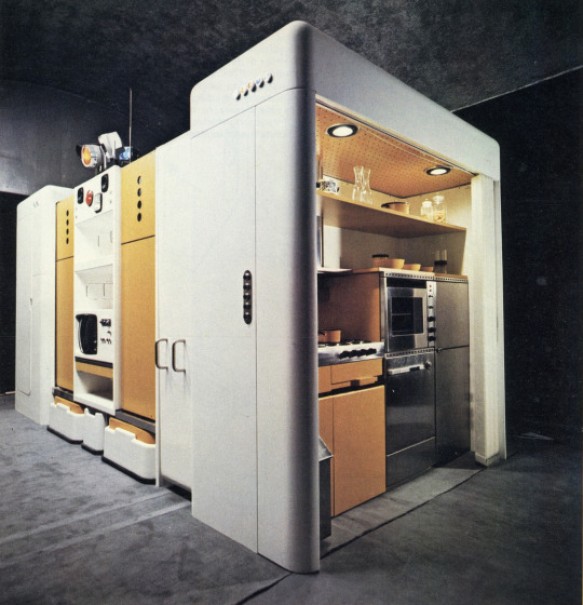 This site has featured a number of modular, everything-included interior units–from MIT’s CityHome to Urban Capital’s Cubitat to Clei’s Elastic Living. The concept makes a ton of sense: plug one of these units into a clear space and have all the furnishings, kitchen and plumbing fixtures, storage–everything basically–ready to roll for habitation. The ability to mass produce them would make them doubly attractive to a developer looking to streamline construction. Though aforementioned examples make it seem like this idea is a recent one, such is not the case. Way-ahead-of-his-time industrial designer Joe Colombo made his Total Furnishing Unit almost 45 years ago.

The unit includes a kitchen, bathroom, two beds, storage, a television and more. It was designed to adapt to multiple room layouts and also to its user’s changing habits–moving the modules around would shift the function of the space. In many ways, Colombo’s design bests the contemporary examples as it was designed to  be configurable to a variety of different room shapes.

The unit, so far as we know, never went beyond exhibition purposes. But add a new coat of paint and an LCD monitor and the unit would look completely modern.