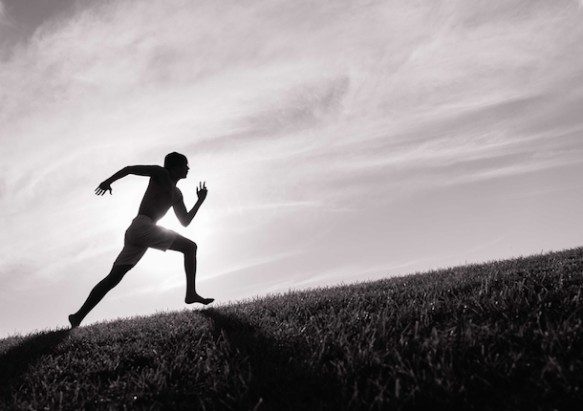 Why You’re Probably Working Out All Wrong

When I was younger, my workouts were leisurely and mellow-tempoed: six to eight hours bike rides up the canyons around Boulder, CO, two to three hour workouts at the gyms, resting three minutes between sets and so on. These were days before work, marriage and children, days when I had the luxury of being inefficient. Today, I no longer have that luxury. I barely have three hours to sleep, much less ride my bike or hang out on the bench press for that long. But the funny thing is that today, even though my not-so-frequent workouts seldom last more than an hour, in many ways I’m in better shape.

What I know now that I didn’t know back then is that it’s intensity of exercise, not duration, that is the decisive factor in staying fit, strong and lean. A few years ago, I was introduced to (or rather I started incorporating) high intensity interval training, or HIIT. Most people know HIIT through Crossfit, the fitness craze conducted out of bunker-like gyms that involves high-intensity, short-duration calisthenics and olympic weightlifting. But the basic practice of HITT can be applied to any form of exercise. The core principle is to exercise in short, high intensity bursts, followed by short rest, then repeated. A HIIT workout often lasts less than a half-hour, but done right, can provide a better workout than a day spent on the treadmill.

NY Times Phys Ed columnist Gretchen Reynolds, one of the web’s more outspoken advocates of interval training, citing a study by a group of Canadian researchers reported “that 10 one-minute intervals—essentially, 10 minutes of strenuous exercise braided with one-minute rest periods between—led to the same changes within muscle cells as about 90 minutes of moderate bike riding.”

But low intensity exercise is not just a time suck–it might even be preventing weight loss. Studies by the European Journal of Applied Physiology have shown that when doing moderate-level cardio, our bodies actually learn to become more efficient in storing fat–a good thing when you’re out in the savannah with the nearest supermarket 15K years in the future, but pretty awful if you’re trying to shed a few pounds. They found that 20+ minutes of moderate cardio suppressed the hormone T3, essential for fat loss. It also increased cortisol and decreased human growth hormone levels, the former a fat loss inhibitor and the latter a muscle-producing inhibitor. No bueno.

None of this is to say that we should stop taking brisk walks, steady-paced bike rides and other moderate-level exercise we might label “cardio.” It is to say that that type of exercise alone is unlikely to lead to increased strength and weight loss or maintenance.

What should you do instead?

Whether you’re a youthful fitness god or greying couch potato–or some combination thereof–you can increase the intensity of your workouts. Start from where you’re at. It’ll not only make you feel better and make you trimmer, it’ll save you a ton of time.