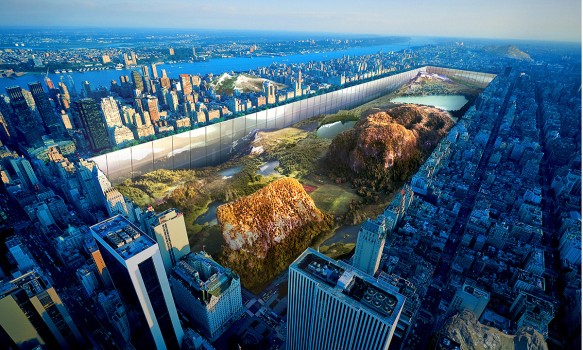 The skyscraper is without a doubt the most effective way of adding density to any patch of land.  And eVolo’s Magazine’s Skyscraper Competition is an exploration of innovative designs around this structure, creating “dynamic and adaptive vertical community.” Unlike every other entry, the winner, dubbed “New York Horizon” by Yitan Sun and Jianshi Wu, took an entirely different approach to scraping the sky. Rather than building up, they dug down deep below the surface of Manhattan. Their design calls for the excavation of Central Park. The walls of the hole are lined with housing and other public and private spaces, all of which enjoy unobstructed views of the new Central Park.

Here are some more details from the designers:

The 1000-feet tall, 100-feet deep mega structure provides a total floor area of 7 square miles, which is about 80 times greater than the Empire State Building. Wrapping all four sides of the new Central Park. This system breaks the traditional perception of large-scale skyscrapers without taking valuable ground area of Manhattan….The soil removed from the original park is relocated to various neighborhoods, which will be demolished and moved into the new structure.

The idea is nothing if not novel and we’re afraid to ask too many questions…like how they would relocate several thousand obstinate upper west siders ? Or the mirrored glass that covers the mega structure? It’s meant to “reach beyond physical boundaries, creating an illusion of infinity….[where] a New Horizon is born.” But it seems like it might reflect all the sun’s light directly into the park, making Death Valley seem like the North Pole. 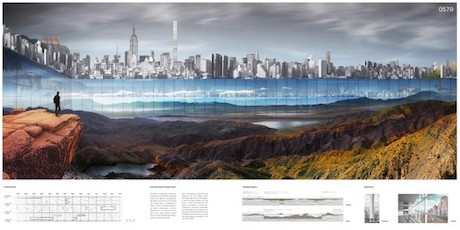