Tour the iPhone of Homes

The gadget is probably the most important product design concept of the 21st Century. Whether applied to a phone, tablet, watch or whatever, the descriptor denotes a product that serves many roles and is packed with as much technology as possible. While the gadget is usually associated with personal tech, in this video clip, UK’s Channel 4 TV show “Gadget Man” applies the philosophy to home design. Plopped in the middle of downtown London, the show constructed a 12 sq meter home that displays a level of versatility usually reserved for smartphones.

Much of the tiny house’s interior slides on rails that are moved by a hand crank. Since the house has a finite amount of space, cranking out one room displaces another–for example, opening the kitchen cuts in on the living room and so on. Even going to the bathroom requires cranking and reducing the main space’s area–not particularly convenient for urgent evacuations.

In addition to interior features, the house is packed with several space saving products. There’s a pillow remote control, a rubber ducky speaker, “plates” that you hold like a ring and a Thermomix, a 12-in-1 appliance that does everything from steaming to blending to cooking and more. 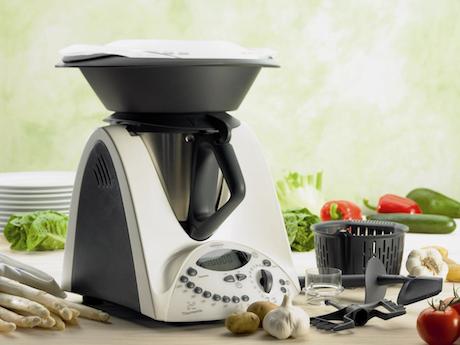 The house idea is very cool, though we wonder if the gadgety ambitions might have exceeded its design. Unlike like a smartphone, which, thanks to Moore’s Law, can fit millions of processors in a tiny package, architectural design will always have the constraint of having a human move through the space. As such, the Gadget house requires that human to do a lot of reconfiguring just to do some pretty basic stuff. We imagine this would get tiresome really quick.

Then again, the place is clearly a concept, not intended for longterm living. And in that sense, it’s a clear success, filled with cool ideas and spreading the good word that a house is whatever you want it to be–not what it has historically been.

[thanks for the tip Graeme]