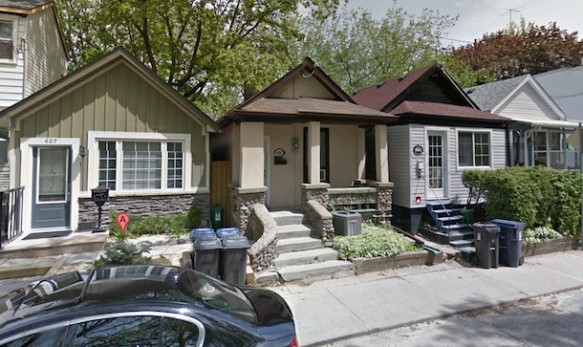 One of the biggest barriers for the proliferation of smart, compact single-family housing is zoning. Many municipalities require certain lot sizes, FARs (floor area ratios) and setbacks (distance from house to road) for homes to be deemed suitable for occupancy. One neighborhood in Toronto sidesteps many of these issues, leading to a cluster of small and/or interesting homes and achieving high density in an otherwise, quasi-suburban part of town.

The neighborhood, deemed “Tiny Town” is centered around Craven Road. Linebox Studio, whose “Mini home” is a modern addition to the mostly historic area, explains how the neighborhood came to be:

First developed as worker housing in the 1880s the street was then a vacant railway corridor, it is now characterized by a series of 10’ wide lots with homes between 300 and 500 square feet in size.  There is a long continuous fence along its west side where it once bordered farmland and separated the wealthy from the poor. In 1909 the city began to gentrify this underprivileged community which resulted in a growing number of stable residents in the area. Since that time, the houses along Craven Road have wavered between the unlawful and decrepit to the quirky and endearing.

The current state of the neighborhood seems to be blend of artistic and crack-addled (Craven St, at various points in history, has been called Crackhead Alley and Alcoholics Row). But the former seems to be displacing the latter as Toronto’s property values ascend, something made clear by the Mini home as well as another architecturally interesting 1100 sq ft work/live space by Shim-Sutcliffe Architects (pics above).

What the neighborhood shows is that people will use the space that’s available. And, as Linebox and Shim-Sutcliffe show, creativity often flourishes when that space is limited.